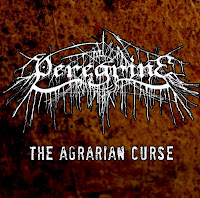 Pennsylvania's Peregrine are a unique thing in modern metal; a band with anarcho-primitivist politics worn proudly on their hand-made buckskin sleeves. The frontman, Kevin Tucker, has written for Species Traitor, an insurrectionist zine that also publishes the likes of John Zerzan and Derrick Jensen, and was recently subpoenaed by the FBI relating to some domestic terrorism issues.

That The Agrarian Curse opens up with a lengthy anti-civ rant should come as no surprise, then, and neither should the rest of the lyrical content of the album. They're delivered in a passionate hardcore-influenced style over a solid if somewhat unimaginative death metal base. Don't jump to conclusions, though. Peregrine is far from metalcore. If metalcore is the bastard spawn of Slayer and Hatebreed's sloppy one night stand, Peregrine is Cursed and Bolt Thrower sitting down to a nice campfire dinner and discussing the downfall of civilization.

The Agrarian Curse opens up strong with "Anatomy of the Machine", which throws you right into the blasting mix of styles rather well, and never languishes in it's mid-tempo sections long enough to grow tiresome. Though the album does start to lag a little in the middle, "The Domesticator's Hand" stands out as 1:23 of this band's most cohesive songwriting and best usage of the elements that make up the whole album. Short and brutal, it's followed by the breakdown-laden "Thirteen Days", another of the better tunes here. "When the Lights Go Out" opens with one of the best riffs on the album, and then "Amor Fati" closes it out, better than every track before it. It's likely that you will find yourself turning this album up as it progresses, and enjoying it more as you do so.

As with any debut, there are some kinks to work out. The drumming needs some tightening up, and there are times when the guitars could come up in the mix a bit for better riffage, but if the idea of hardcore and death metal aesthetics thrown together in a non-offensive way interests you, give this a listen. Coming from the perspective of someone who appreciates hardcore more than most death metal, I almost wish Peregrine would do more of one or the other, but The Agrarian Curse manages to carve a niche of it's own and lays a good foundation for future releases.

This is definitely worth checking out, at least to hear it once.