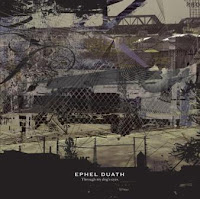 While Ephel Duath have ever been an interesting and original band, I have never been much of a fan of their jazzier, mathematical progressions over the past few albums. For me, the more avant-garde black metal leaning of the first full-length Phormula remains the band's best material.

Through My Dog's Eyes is an interesting listen. As usual, you can't be quite sure what to expect; the album combines such wide ranging influences as blues, jazz, math metal, sludge and indie rock into a far-reaching but functional morass of poetic angst. The album starts with the bluesy slide of "Gift", complete with country guitar jangle, angry and aggressive hardcore vocals, and progressive explorations. Unfortunately, it's just not very good. "Promenade" and "Breed" are somewhat better, with some really strange riffs and a kind of driving alien atmosphere that often evoked the feel of a Voivod, yet taken to a new extreme of oddity. The sludge-driven experimental doom of "Spider Shaped Leaves" (great song title) is also pretty captivating, but the rest of the album gave me little to remember, even after a subsequent playthrough.

The album has a unique mix just as it has a fusion of expressive styles. The guitars are not too distorted, but bring just the right brunt of punky sludge to keep the album within the borders of a dark and playful tone. Guillermo's vocals are angry yet slip right into the confusion as a unifying force. If you are a fan of the past few albums, this one goes even further out into territory all its own. You may find quite a lot to engage you. I was certainly engaged by the stylistic choices, just not enough by the actual riffing. If you're new to the band, but favor the extreme avant-garde fringe metal ripples of bands like Ulver, Maudlin of the Well/Kayo Dot, recent Dillinger Escape Plan, etc, then give it at least a listen.