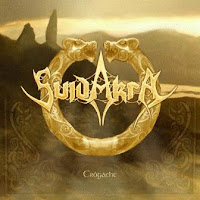 I've not been a follower of Suidakra in the past, the occasional song may have grabbed my attention but their albums as a whole haven't impressed me. So I'll say Crógacht, nine albums into their career, is really set to change my mind. An excellent mesh of glorious melodic death metal with just enough folk elements to provide a context for their concept, which is here centered on Celtic history and folklore. They've touched upon this several times in the past, but here it's a central focus, and one of the best albums of its sort I've heard.

The album opens with the beautiful instrumental "Slán", the use of pipes over acoustic strings provides a beautiful landscape from which the epic can charge forth. And charge it does, with the thundering "Conlaoch" and its soaring melodies. "Isle of Skye" is a bit more mid-paced but the melodies weave through it, catapulting the track instantly into memory. "Scáthach" is another scorcher with some of the best winding melodic death metal this side of Dark Tranquillity. "Feats of War" is a folk song with some female vocals, and while I love the music, the vocals are 'meh'. I would have enjoyed if they have gone with the original language which the album is centered about. It sounds goofy in English. This is short-lived though, "Shattering Swords" is a great track to suck you back into their sweeping, epic style. "Ár Nasc Fola" is a nice acoustic instrumental with some percussion. "Gilded Oars" is the best song on the album, I love its build-up and slower melodeath breakdowns. The album closes with another of its best, the epic "Baile's Strand".

A crisp production dominates the band's sound, the drums thunder and the melodies bleed right into your ears. The vocals are typical of Swedish-influence melodic death, but they sound great nonetheless. The keyboards are epic and tastefully added here, not as much as say Equilibrium but enough that they become a central instrument. In the end, I am very impressed, and if you are a folk metal fan of bands like Equilibrium, Ensiferum, or even Wintersun I would highly recommend it. It has spurred enough interest in me that I may give some previous albums a second chance.

Wintersun ain't Folk Death (or whatever you want to classify these guys as).

I like this more without the old clean singer, though the album seems short since there's two instrumentals and that one song with the female singer who's as you said 'meh'.

I don't think I said Wintersun was folk death, I just know a lot of folk metal fans who enjoy them that I think would also like this.

Yeah, the female singer, not so much.

Missed the 'even' before Wintersun, my bad!

This sounds like something I'd enjoy. I've gotta give it a whirl.