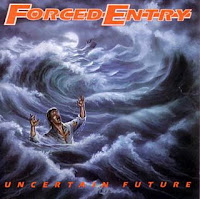 There was a time when Forced Entry was one of the biggest hopefuls in the US thrash/speed metal undercurrent explosion of the late 80s. Their penchant for blunt, percussive rhythms combined with progressive lead work, adventurous titles and lyrics, and crunchy production combined for a pair of highly regarded albums. Of the two, I have always preferred the debut Uncertain Future.

Eight tracks here, each memorable and inventive. "Bludgeon" opens with a chop fest, like a very brief thrash alternative to "YYZ". This transforms into a bluesy acoustic sequence with an amazing guitar solo. We are only getting started, folks. The verse lumbers forth with Tony Benjamins brute voice over a groovy thrash beating. "Kaleidoscope of Pain" is the perfect soundtrack for crunching up cars in the junkyard, and has a nice breakdown. "A Look Through Glass" once again begins with a mechanical thrash riff and then an acoustic/thrash build up akin to what you'd hear on the early Testament albums. "Anaconda" begins with an environment of tribal drumming and deep, plodding bass, and evolves into perhaps the most fitting thrash tribute to a snake ever written. "Octoclops" grooves with abandon, and once again has a great memorable lead break near its intro. "Unrest They Find" might be the catchiest song on the album, starting with a nice acoustic passage and then an unforgettable slower paced riff, before it busts out into THAT RIFF. You know, the best riff on the album type, the defining guitar part. The song sounds like Prong, Testament and Megadeth jamming off. "Morgulon" is a decent, faster song, and the album's closer "Foreign Policy" is a solid hammering.

The mix of the album really captures the gut wrenching, fist to the face guitar riffs this band was aiming for, and the acoustic/solo passages are very clear. In fact, Uncertain Future sounds pretty good today, despite its age, if you can get past the fact the guitars aren't all layered sounding like what you'd hear today.

Their 2nd album had a similar style but much stranger, with more progressive elements and unfortunately some rather stupid songs. Not the case here. Unfortunately, the band fizzled out during the great thrash metal purge of the early to mid 90s, unable to secure a new record deal after their work with Combat/Relativity. The future is uncertain as to whether they'll follow so many other bands having midlife crises and re-unite for a new album, tour or festivals, fuck knows they must have been given many offers.