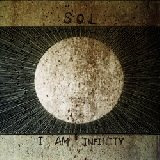 Sol's debut Let There Be a Massacre was a beast of a debut album, a crushing voyage of downtrodden despair and grief which could quickly overwhelm your senses and turn your blue skies ever grayer. I could go so far as to say that album was brilliant in its pain quotient. It would be a tough act to follow for any new artist, but Brahe returns to try with his sophomore effort I Am Infinity.

This time, the concept has shifted from the worms of humanity into a cosmic exploration, spanning the creation and ultimatum of the universe. In addition, Sol has several more guest musicians working on the project. I must say this now: you have to listen closely to this album, most of the great riffs are buried in the really weak production, and it can be very easy to become bored. But at its heart, there are some great, minimal doom riffs which do justice to the legacy of the debut.

The album is sandwiched in a pair of ambient electro pieces called "Cosmos Reshaping" and the more chanted "Cosmos Reborn". These do a decent job of setting up the bleak tone of the album's theme, the endless void of space and time and the futility of trying to explore it. The meat of the album lies in the four length tracks between. "And I Rose" begins with a very Sabbath funeral pace, but soon becomes glorious as the added guitar melody tones in behind the first. There are some excellent, somber black/doom passages to this track, and it was my favorite on the album. "Abyss of Light" is similar, threading off a very basic pattern of doom chords and growls, then layering them in soft classic doom harmonies. The song picks up near the end with some driving mid-paced, atmospheric black metal. "From Ashes to Infinity" starts with a fairly evil riff, becoming crushing funeral doom near its center, and there is a nice folksy breakdown with some accordion. The last of the metal tracks is "The New Void" with a glorious pattern of chords, picking up into a little groovy death/doom.

The music is all quite solid, or better, it's just that the mix didn't work for me this time out. It's primal and raw but the tones of the guitars and volume levels just don't do the riffs as much justice. Had the drums come across more loudly and crashing, and the guitars possessed a denser fabric, this album could have truly decimated me. As it stands, I had to strain a little to really feel the sorrow of the riffs. Let There Be a Massacre was no big budget recording, mind you, but it seemed a little better in overall sound.

I Am Infinity should appeal to most fans of the debut, but it's not quite as good. This is very old school sounding death/doom with a blackened edge, and some simple and good quality riffing. The concept is one that fits the sound of the band well. Any flaws here are largely mix-based, and it's still quite fucking depressing. Give it a chance.