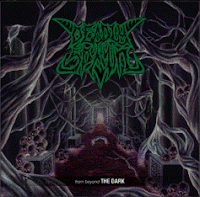 What a delight...first I get a new album from Intestine Baalism, and then this...the debut from a band performing brutal old school death metal with charming, adventurous leads and dense, murky, creepy atmosphere. Japan is delivering the goods. Not so surprising, guitarist Jiro Ito was once a member of Intestine Baalism.

But on to the record. From Beyond the Dark provides 8 tracks of low and bludgeoning brutality with an affection for early 90s death metal songwriting. It works all too well. "Lunatic" is a choppy and punching track to open the album, with some excellent alien shredding. "Pray" begins with a great riff which would not have sounded out of place on the classic Harmony Corruption from Napalm Death. "Looking Down on the Past" begins with playful bass below the percussion, then erupting into a riff that will rock your face off. "Screaming to Break Out of This Darkness" grinds. "Omnipotence is Impotence" was one of my favorites on the album with its dual chugging tech death/thrash intro. "Over Fear" is another energetic, winding tune with some great guitar solos.

Like Intestine Baalism, this band is excellent at capturing several old school death styles and merging them into something that becomes their own. The dense and depressive production of the album ups the ante, this is far from your big budget tech death, and as a result it sounds far more evil and genuine. I didn't feel all the songs were tip top quality or entirely consistent, but the majority deliver down tuned death metal bliss. This is a great debut and I hope we will be hearing more like this in the future.