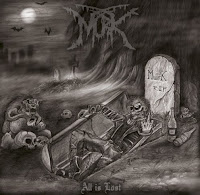 This is the 2nd full-length album from the one man Italian black metal violator Lore as Murk. With a No Colours record deal under his belt, he unleashes 10 tracks of classic minimal black style with the usual suspects for influence: Hellhammer/Celtic Frost, Bathory, Mayhem, and Darkthrone. There is also an old school death metal influence to some of his vocals which really gives the album a grimy edge to it, think the blunt rasp of Possessed but really drawn out and lower pitched. I realize the band may not consider itself 'black metal', being highly influenced by punkish metal like Motorhead, but this is the sound that manifests which most will relate to.

The aim here is to deliver very simple, driving barrage of rhythms but saturate them in sick, dripping vocals, occasionally surprising you with some evil guitar harmony. Well, I may not have been entirely blown away by All is Lost, but it's right on target. I found myself banging my head to the rockers "Abuse of Nothingness", "In the Sign of the Atom", and "Erased", but I also enjoyed the more melodic, faster tracks like "No Return". Perhaps the best song on the album is "The Wait" with its bluesy melodies over mid paced black riffs.

The recording sounds good, you can hear the distorted bass bouncing along below the rhythm guitars, the drums fit perfectly, with a nice double bass tone rounding out the sound. The vocals are probably the strong point, they are laden with a vile character which will have you skipping back to occasionally re-listen. There is also a dash of primitive thrash metal used in some of the tracks to truly tie this into the old school vibe.

It's not really original, it's not really catchy, but if you are a fan of the stripped down black metal which has become all the rage this past decade I think it's only natural you should give Murk a spin.