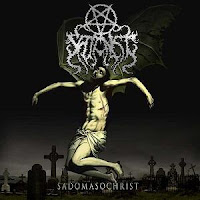 There is quite a lot to be said for this Alaskan two piece band. They seem to love causing pain. They also seem to loathe Christians. Most importantly, they have an extremely pissed off sneer to their style which very few black metal bands can rival. I think what I'm trying to say is these guys have a distinct voice for this field. Naming themselves 'Marquis de Sade' and 'Gilles de Rais' is a little bit tacky in my opinion, also a little too obvious, but it has nothing to do with the songs.

The album has a few evil ambient tracks like the opener "The Seventh Litany of the Ritual of Canon Docre", but the majority is black metal with a death metal edge to it, moving at mid to fast paces. "Dawn of Baphomet" is a twisting and forceful piece with a lot of dark melodies and some glorious sheen to it. It's a very interesting tune. "Sadomasochrist" is an evil black thrasher with some creepy keyboards. Another winner. "Tree of Death (the Averse Sefira)" begins with some rather hissy keyboards and then explodes into some amazing, sad melodies under the stark vocals. "Autoerotic Crucifixation" is an excellent song, mid paced rocking black metal with a nice melodic glory break in the latter half. The rest of the tracks are also pretty good.

The bass and guitars are both done well. The leads and harmonies sound good. And I really, really like this guy's vocals. They just sound fucking mean (though occasionally there is a mellow, singing part). The fact that the band can take this truly vile edge and then toss in some atmospheric, melodic material as well shows a lot of diversity. I was at times reminded of Deceased, another band who can mix these elements well. The subject matter is truly sadistic. Can Alaska really do this to men? Not just Alaska but BARROW, Alaska...creepy. Maybe more black metal bands should move there. Sadomasochrist is no perfect record, a few of the tracks felt weaker than others, but there is enough here to interest anyone who likes black metal with a dash of originality, and it's a good debut worth checking out.

What was your first clue?