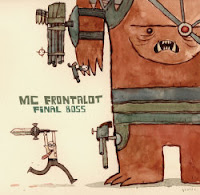 MC Frontalot represents a lot of what I love about underground music. He has taken a concept so bizarre and outlandish as nerdcore rap, and invested so much talent and creativity into it that he's not only legitimized the genre, but expanded the entire sound. Final Boss is his most diverse and impressive album thus far, and if there is justice in this world, his music will start reaching far beyond the Penny Arcade geek scene which has already transformed him into something of a demigod. Traces of soul, electronica, pop, funk, and jazz all blend nicely into a beautiful painting, with his dorky flow as the brush.

Of course, the joys of this album come at a cost...the first two tracks are its most dull and uninspiring. In "Wallflowers", he's got decent flow, but the 'Do the Margaret Thatcher' refrain is weak and the music is merely annoying. "Tongue-Clucking Grammarian" is better, with a nice, uptempo beat and a few cool sounds in there, but still one of the weak tracks here. After these, the rest of the album is golden. "Shame of the Otaku" is a fucking J-Pop song...with Front rapping the verses. It's quite nice, and quite true to its source...this sounds like something you'd actually hear on some domestic pop there (I should know, I collect the stuff). "Canadia" is a nice electro rap, Front shares the vocals with Jesse Dangerously and Wordburlgar, and his chorus is just magnificent. The song is a nice mockery of the US's supposed national xenophobia, targeting its least likely neighbor. "The AM Radio Skit" is...well, strange. "Scare Goat" is a groovy, 80s nu wave gothic soul inflected tribute to cryptozoology. "Diseases of Yore" is a cheesy, tongue-in-cheek, dance backed devotion to the fatal maladies of history. "Black Box" is a political track about voting, featuring some input from Random. Other highlights include the excellent "In Arrears", with some nice singing in the chorus; "A Skit About Vocation" which features actor/geek Wil Wheaton RAPPING ABOUT FUCKING SEAFOOD ('Shellfish, specifically' hahaha). The album closes with the incredible title track, which is of course rapped through the perspective of its namesake, the classic video game boss. Absolutely incredible.

What more to be said here that Front doesn't say already in his clever, cerebral lyrics? He seems to branch out a lot into other subjects than just the normal video game worship, but it works. He makes a tasteful use of his guest rappers and singers, they all shine on the album. The band knows how to write a hook, and it's such an original blend of styles well worth the attention. Front remains the elder statesman of this blossoming micro-genre, and unlike a few of his...errr, more annoying peers, I think he has some staying power. This album proves it. Can't wait for the next.

Verdict: Win [8/10] (doesn’t matter how you struggle, never gets you past the end)

huh, didn't know a new one was out. I'm pretty sure the title track was in the credits of the first PA game episode, which is what got me to actually appreciated nerdcore. My problem with Frontalot is that his first two albums are so inconsistent, with a lot of his songs having great lyrics but uninteresting beats.

I'm guessing you were referring to MC Chris with the annoying peers comment :D It took me a while to get into him.

Yeah, the first two songs are typical Frontalot flops, but the rest of the album shows a great improvement over his previous works. It also really helps that he has a lot of guests, since they break up the sound and keep Frontalot from wearing out the songs.

MC Chris is....eh. Fucking annoying.
He has 2-3 decent songs, but beyond that...no. You can only stand so many songs about farts and weed. He's really more of a fratboy than a geek if you think about it.

Yes, this Front album is far better than the earlier ones.

I won't dispute the fratboy part of it at all, but on the whole, I enjoy mc chris a lot more than Frontalot. Frontalot is a lot more complex, but he just doesn't have the fun of mc chris. I'd recommend the new mc chris album, but you've got plenty of other things to listen to already :) I will say that the Will Wheaton song is weirdly similar to the final song on MC Chris is Dead.

Did you check out the Scroobius Pip album that I reviewed a while ago?

I heard the new MC Chris album. Let's just say I'm glad I listen to music digitally, if it had been a hard copy I would have made a dent in my wall I would have chucked it so hard.

Yeah, MC Chris's attitude, dumb jokes and... music... kinda annoyed me when I watched whichever PAX DVD he was on.

He has 2-3 tracks that are annoying & catchy. The rest just seem annoying.