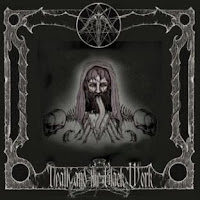 Evil. Evil is, at the base of things, one of the essential aspects of black metal. Not surprisingly, it is also what is lacking in the vast majority of bands who call this style their own, those who are mindlessly fucking the sound of Darkthrone to death in their complete obliviousness. Give me evil! Who among you can play such vicious, hateful malevolence? Who can channel the poisoned dementia that lies at the heart of black metal?

Crawling ambient shrieks and choking invocations herald the album's coming with all the foresight of a nightmare. You will know it from the thick atmosphere that the music is swathed in, from the ritual susurrus of the vocals, from the howling black pitch that is the world of Nightbringer. Death and the Black Work is a harbinger; a proclamation, a declaration, that blasphemy shall triumph and all light will be damned in their night. Occult, atmospheric black metal out of our very own fucking Colorado, whose beautiful mountains must be hiding a profound sickness for this to have come into existence.

I don't need to go into this, you should know if you're worthy of listening already. However, I have two complaints. One - the production is delightfully murky, but they need a more professional job to really bring across such incredible horror. The drums are rather low in the mix and guitars can be indistinct, lacking that certain heft that would make them truly shine. Two - the songwriting also needs just a little more to it. Some of the riffs can drag on after a while, and I wasn't always swept away by the songs. I'd love to see more slowed down parts and ambient sections mixed in, while I'm at it.

Death and the Black Work is fantastic on its own, but I find it most exciting as a portent for blasphemies to come. The ritual has been performed, the foundation lain - the evil is manifest, yet it is not complete. If Nightbringer can cross the final threshold and bring us their opus, their own Andacht...it will be magnificent. As it stands, this is a brilliant debut well worth the time of lovers of atmosphere.

(note: this review is for the cd release, and does not cover the two vinyl-only tracks.)

http://www.myspace.com/nightbringerofficial
Posted by is this your life? at 9:13 AM