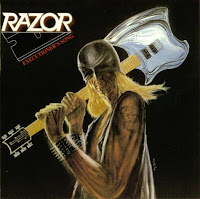 Many fans consider Razor's other 1985 album, Evil Invaders to be their true cult masterpiece. Others consider their more punchy, frenetic, and violent later work like Violent Restitution to be their best. While I fall in the latter category, there is no question in my mind that Executioner's Song is not only their most overlooked album, but one of the greatest Canadian heavy metal albums ever conceived.

At its roots its a dirty NWOBHM-inspired record like something you'd have heard from their countrymen Exciter, but more aggressive and certainly contains hints toward their later direction. All the songs are excellent and inspirational. Stace Sheepdog's vocals are gritty and awesome, and Dave Carlo is one of the best riff writers ever. "Take This Torch" is a speed metal anthem of energetic, distinct chords and a great chorus (love that bass):

Bright lights, now you can see where you are
Far, out in the universe
Now, you, try to escape from this spot
Hot, ready or not
Take this torch

I don't quite get it either and I don't care, my previous band Extinction Agenda used to cover this song at our rehearsals and my only regret is that we never performed it live. Amazing track, and not the only one on the record. "Fast and Loud" is your typical metal party song but this was no Mötley Crüe, it was far more aggressive and you could totally envision yourself doing a circle mosh and impaling some fool in the head with a spiked gauntlet. "City of Damnation" is simply one of the most amazing and filthy raw speed metal tracks ever written on Earth. If you don't like that chorus part then you don't fucking like real metal. "Escape the Fire" also thrills with its catchy melodic muted riff erupting into the speed and chords and glory. And there are so many more, the molten rocking riffs of "Distant Thunder". The blazing "Hot Metal". The sun-hot "Time Bomb".

If you can't already tell this album burns to the touch. I can feel the sweat on my skin just thinking about it. It makes me want to get a leather mask and a whip, some 80s metal chicks with big hair and then make them dance for me in a cage while I wear a cock ring and suspend my testicles over a candle for the sensation. This is the world I live in.

Maybe I have said too much...