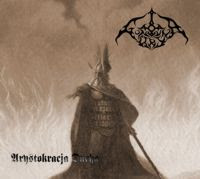 Gontyna Kry is one of the most enduring of the NSBM bands, having formed some 15 years past. Arystokracja Ducha is only the 3rd full-length, and the band currently consists of only one man, Bard, who performs all the instruments. This is an impressive feat, because the music here is tastefully complex and well-structured, a hybrid of black and progressive death metal with some pagan folk influence, sweeping orchestral atmospheres, and excellent solo work.

"Czas Wendów" is a flowing acoustic intro with synth atmosphere, it's quite nice like the lapping of waves on a northern shore, and then some spoken folk before the album bursts into the glorious black speed of "Lucicowa dusza", a labyrinth of gothic pagan riffing, atmospheric layers coagulating about its fiendish, melodic black heart. "Mistyczny zywiol wojny" is a mid-paced track with some insane double bass (drum machine I'm assuming?) under its lavish tapestry of wisdom and mystique. The rest of the album is of a similar quality, with some other nice instrumental pieces such as "Biel i czerwieñ". If you can imagine a Polish version of Therion but with more technical guitar work and less choirs, you might be in the right frame of mind, though there are enough differences.

The album sounds quite nice, especially the guitar tone and the tasteful layers of synth. The vocals have a desperate black curdling to them, and the acoustics on the album are excellent throughout. Many bands of this ilk are still caught in the super raw rehearsal style of production, but Gontyna Kry has a professional and vibrant approach to its sound. If you are into well-honed pagan/NSBM and don't mind some influence of death or gothic metal, then Arystokracja Ducha is an album certainly worth your time, and the best I've heard yet from this veteran act.