Shadows of Paragon - Fear of Being Forever Lost EP (2009) 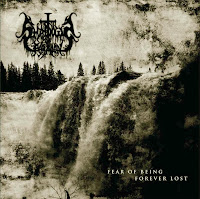 This is a promotional EP of epic black/death metal from a newer Swedish band, who are using it as a sort of teaser for their upcoming full-length album. The band has wisely decided to offer this EP completely free, you can find the details at the band's site.

There are four tracks here, delivered in a straightforward hybrid style with a mixture of snarling and growling vocals, typical of other Swedish melodic death or black metal. The band makes use of piano in opener "Silentium", a fairly mid-paced track with epic melodies and a lot of slower blast beats to keep the pace ever forward. "Fear of Being Forever Lost" is a little blacker, not unlike Sacramentum or Dark Funeral. "In the Midst of Morbidity" has a little more of the death metal influence in the vocals and a few of the breakbeats, but for the most part it is charging over a hyper blast beat. The album closes with the piano/ambient piece "Ad Infinitum".

The production is solid, and it was mixed at Studio Fredman in Sweden, where many popular acts developed their sound. The band is tight, this is true Swedish melodic black metal and all the instruments fall into place. The biggest downside to this EP: a lot of the riffs just aren't catchy enough. Solid enough to make the songs work, but there were no 'oh damn' parts where I felt I had to re-listen. I can probably recommend to fans of the late 90s Swedish sound, bands like Sacramentum, Lord Belial, Dissection, etc. This is only an EP, it's quite possible the rest of the material on the upcoming full-length is a lot better, we shall wait and hear.