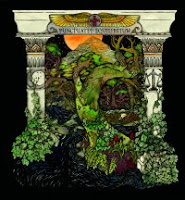 Scott "Wino" Weinrich really needs no introduction, but for those who do not know, he is something of a pioneer. Back into the 1970s he has been fronting various doom metal bands such as Saint Vitus, The Obsessed, Spirit Caravan, and others. After the breakup of the latest act, The Hidden Hand, he struck out on his own with the help of Rezin's Jon Blank on bass and drummer JP Gaster of Clutch.

What we have here, unsurprisingly, is a smörgåsbord of stoner tunes. Wino's vocals are distinct and enjoyable, something close to a mixture of Lemmy Kilmister and Ozzy Osbourne. Production is clear and crisp, and in general the album is very accessible. Styles range from an extremely slow, swirling sludgy trip such as "The Eyes of the Flesh" to a much more lighthearted and catchy "Smilin' Road" with its Clutch-esque hooks. Although the album has its moments, Punctuated Equilibrium's jam session tracks often lose my attention, and there are plenty of them, which ends up being quite a good chunk of an album that clocks in at only thirty six minutes.

Honestly, it is the stoner metal connoisseur's prerogative to compare this to the rest of Wino's body of work as I am no expert in regard to that. All told it's not a bad effort, but outsite of fans of the genre I do not think it is something that will turn a lot of heads.