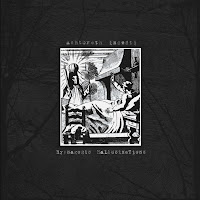 This is the 2nd and final demo from a newer Belgian black metal band, they formed in 2007 so they haven't been around long. They've got a slicing style of roots Norse black with throaty vocals and a lot of mid-paced slamming riffs akin to earlier Bathory.

There are four tracks, beginning with the titular "Hypnagogic Hallucinations", 2 minutes starting with a sample and then a single, simple riff. "(Let it All) Spoil" is somewhat more substantial, driven by a wicked riff. I like how the bass hangs at the edge of perception with this band, just audible enough to conjure an atmosphere. This track also has a creepy breakdown with some acoustics. Very nice. "Isolated" once again thrills with a mid paced blast and an edge-of-your-ears bass line hums below. I'm not sure this is intentional but it definitely adds a dimension of imagery. The final track "Exist" opens with a nihilistic sample and then barrels through the longest tune on the demo.

The mix of the demo is what you might expect, audible enough to appreciate but nothing superb. The musicianship is very minimal here, like similar bands, but complexity is not necessary to deliver the band's cutting black vitriol. Again we are presented with a demo sure to please fans of the bedroom/basement black metal empire, but of little interest to others. Their site mentions that they've finished an album, I'm not sure if they were referring to this demo swan song or if more material will see a release.