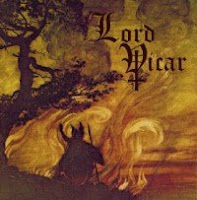 After the Demon of Freedom EP teaser some months ago, Lord Vicar have returned with their debut full-length, featuring seven new songs (and no overlap with the EP). The style here is well executed early Black Sabbath worship, though you can certainly hear touches of the more contemporary Count Raven and Saint Vitus in the band's name, riffing, and vocals, which makes perfect sense: Chritus did vocals in both those bands. Nonetheless, if you're into this old school doom vibe, Fear No Pain is a good album worth hearing.

"Down the Nails" is a slow, drawling, 8-minute crusher, which immediately lapses the listener into that catatonic yet driven state despair, exemplifying effective doom metal. "Pillars Under Water" rocks forward with a grooving riff you'd expect on an Orange Goblin record, Chritus' Ozzy-like vocals really saturating the song with nostalgic fervor. "Born of Jackal" begins with a graceful acoustic segment that dissolves into glorious, sad melodic doom, followed by the pure, slow rock verse. The rest of the tracks on the album are considerably more epic, longer but never dull. "The Last of the Templars" is beautiful, with some bluesy solos and excellent guitar melodies. "The Spartan" is a tortured crusher, over 10 minutes long with very simple riffing. "A Man Called Horse" is one of my favorite tracks on the album, with flowing, doom grooves and soaring melodies which eclipse the verse guitars later in the track. The album closes with the 14 minute + "The Funeral Pyre", beginning with a lengthy acoustic section with vocals and then kicking some ass with its sparse, depressive riffing.

The mix is quite nice, the guitars are potent, punchy and raw, leaving space for the bass to flow below and percussion to shine. The melodies kick ass and Chritus has never sounded better. If you are a fan of traditional doom metal, starting with Sabbath and 'evolving' into bands like Saint Vitus, The Obsessed, and Count Raven, then it is only natural you should seek this out, because it is a fine example of the form. I'd argue its on par with just about anything Chritus did with his former bands, and very definitely worth checking out because it conveys just the right mix of nostalgia and sorrow.