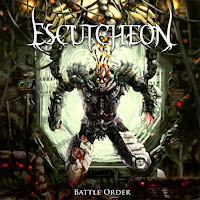 This is the sophomore effort from a Dutch death metal band straddling the fence between a more brutal style and the melodic leanings of the late 90s Scandinavian scene. They share a guitar player with Devious, but I didn't enjoy this as much as his other band.

The performance is sufficient, and the band is heavy enough not to use any cheap melodies like you'll hear in the weaker crop of melodic death coming out. Occasionally, there will be a riff in there that hooks me, such as the winding bridge of "Fear Based Denial" or the savage melodic riffing of "Terrestrial Radiation" with that slower, sad breakdown. But for the most part, I wasn't very much inspired by what I was hearing.

The album has a nice raw feel to it, very 90s, nothing overproduced at all. All the instruments cut through like razors, and the dual melodies get a nice sound layered over the chugging rhythms. Though they don't sound much like Amon Amarth, they remind me of that heavy but glorious type of death metal which exists in that cramped space between the over-genres. I just wish I had found some of the songs catchier. There's nothing really negative to say though, it's just not something I will likely return to.