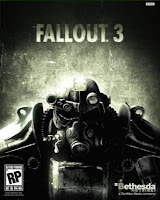 Where do I begin? I could start with Ron Perlman saying his iconic line from the Fallout series like every other reviewer, or I could try to keep this short and simple without trying to sound profound (especially since I can’t pull it off). Fallout 3 is the newest installment to the Fallout franchise, which is no doubt familiar to most people who have grown up during the 90’s, and were exposed to computer gaming. The original two Fallout games were made by now defunct Black Isle Studios, and the rights ended up with Bethesda Softworks, known to most people from their Elder Scrolls series. Naturally, this made some fans uneasy, and has been the source of internet drama for a long time before the game was released. What now then? Well, let’s have a look at the game itself.

Fallout 3 is based, like the previous games, in a retro-future version of the United States. In this universe, the technology level peaked in a culture that resembles the 50’s of our world. Everything is nuclear powered, and the Cold War didn’t happen between the U.S. and U.S.S.R. , but U.S. and China instead. It also didn’t peter out over time, and eventually escalated to a full blown nuclear war. The Fallout series is set long after this war, and concentrates on adventures and survival in a post-apocalyptic world. Fallout 3 is based in an area outside and including parts of Washington D.C.. This area was hit quite badly in the war, and it shows in the environment. The landscape in Fallout 3 is mostly composed of varying shades of grey and brown, which seems to be a trend nowadays for “gritty realism” and whatnot, but it truly fits and, I dare say, is required for a proper post-apocalyptic vibe. Truly, the visuals of Fallout 3 are brilliant. From the retro design of cars to landscapes blasted by radioactive winds, to glowing dumps of nuclear waste, the world of Fallout 3 is quite beautiful in a weird way, and stepping out of the Vault for the first time is an eye-opening experience.

Oh yes, the Vaults. When the nuclear war happened, some people hid in underground Vaults, allegedly designed to keep them safe from the bombs and radiation. The player starts in one of these Vaults, and goes through a quick process of growing up, before having to leave. I quite liked the way the character creation was handled in this game, giving you a sense that your character has a history, instead of being just created on the spot. Even if on consequent characters it might be a bit irritating to go through the same process, the first time is delightful. Did I mention that your father is voiced by Liam Neeson?

Many people were worried that Fallout 3 might play like Oblivion, Bethesda’s previous game. In some ways it does, but in a good way. The combat is generally fun, and gets better the more creative you get. V.A.T.S. system developed by Bethesda for Fallout 3 replaces the old turn-based combat option from the previous games. It pauses the game, and you can select the enemy, and the body part to target. The game then uses your character’s attributes to calculate the likelihood of a hit, and plays it out. This can help those who are not used to FPS games, but it is just bloody good fun to watch your character blowing off limbs in slow motion. It has yet to get old, and I’ve been playing this game since the launch.

The game world is quite vast, full of hidden surprises, and things to explore. Unfortunately Bethesda has relatively few voice actors to voice all their characters, which occasionally leads to a feeling of déjà-vu, but this is nowhere near the levels encountered in Oblivion. The in-game radio channels are great as well, especially Galaxy News Radio, which plays old songs that are surprisingly good. It is also a surreal experience to waltz along in a wasteland, listening to Danny Kaye and the Andrew Sisters.

For the most part, the game-play is either fine or excellent, the visuals are beautiful, there’s plenty to do, and overall the game is well worth the money. It feels like some small part of the feel of the original Fallout games is missing, and there’s a pervading sense of Oblivion all over the game, but this still feels like a true Fallout game, albeit quite different to the previous ones. Definitely a GOTY contender.