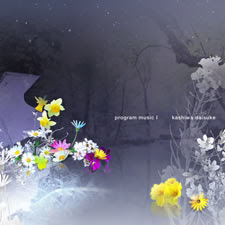 Ah, the Japanese record label Noble. Home, at times, to personal favourites such as World's End Girlfriend and Piana, it makes all too much sense that Kashiwa Daisuke is now amongst their roster.

Coming from the short-lived and not quite fully realized post-rock of previous band Yodaka, Kashiwa's solo career has since evolved in a more neoclassical direction. Program Music I, his second album, is built around the flowing interplay of piano and stringed instruments amongst a wash of ambient currents, punctuated by the crashing of drums and made turbid through the whimsical use of digital cutting. It is profound, almost spiritual music, peaceful even when it rages with emotion.

Far less violent than World's End Girlfriend's experimentations, yet more focused than the soft cooing of Piana, Program Music I is a beautiful journey through two compositions, each the musical telling of a Japanese story. The first track, "Stella", is a 35-minute take on Night of the Milky Way Railway, which is the story of Giovanni and his drowned friend who are travelling on the celestial railway for souls travelling to the afterlife. Suitably, "Stella" has a keening sense of grandeur to it, rising with bittersweet post-rock glory as the violins swell in intensity. It is a soaring dreamscape, otherworldly, yet stirring and familiar like a forgotten memory. The second song, clocking in at 25 minutes, tells the story of "Run, Melos!", a Japanese take on the Greek tale of a boy fighting to make it to his own execution on time so that his friend does not take his place. Suitably, this track is much more urgent and wild, both capturing the struggles of the boy and the feeling of time slipping away.

The great triumph here, beyond the exquisite music, is the fact that each song is completely captivating in its entirety. Rather than feeling like an exercise in repetition, Program Music I is rousing, masterfully composed, and engaging.

I do not have a single complaint.