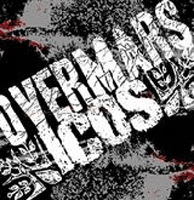 This is just a short two-song split, but the Icos part of it excited me enough to write something about it.

Overmars is a French group playing a slightly trippy, post-metal-inflected form of hardcore. "The Road to Awe" spends its first two minutes meandering in a slow, pleasant instrumental laced with murmuring electronic noises, after which Overmars kick into a shimmering, jangly wall of guitars topped off with harsh, lightly tormented vocals. The song is definitely enjoyable, but they really need a better production to get the feel across. "The Road to Awe" is dry and flat, two things that have no place in such a heavy style.

The Icos song here is the most doomed material I've heard in a long time. Drenched in the reverb of a broken mind, "Far From Home" crawls wretchedly on shattered legs, bellowing in pain and hate and frustration. Every beat is agony, inevitable yet unforgivable in its coming. The vocals retain that dry, pissed-off hardcore feel but match the music so much better than what we normally see in these sorts of cross-overs. As much as reviewers may want to tie this into other bands and sources, Icos' material on this split is the pure essence of funeral doom, and I fucking love it. As a little aside, the warbling electronic pulses at the beginning remind me of Mar de Grises' most recent material, which is a definite plus in my book. From what I can tell of their older albums, Icos haven't made anything quite as desolate as "Far From Home," leaving me extremely excited for new material from them.

As I said, this is just two songs, so there's nothing absolutely necessary about it, but the Icos song is so fantastic that it's worth your time to check it out.

http://www.myspace.com/overmars
Posted by is this your life? at 7:53 PM