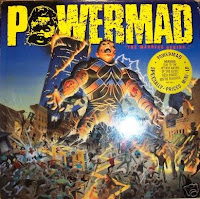 I clearly remember ordering this EP through a magazine advertisement as a teen, and I was more than happy with the material. This was of course before they released their cult classic album Absolute Power and made a cameo in the Nicholas Cage film Wild at Heart.

This was Midwest US thrash/speed metal with a very urban, New York feel to it. I'd compare their music to Anthrax and perhaps a little Overkill, but they also have some similarities to bands like Laaz Rockit. There are four tracks on the EP, beginning with "Terminator". The verse/chorus is pretty average, but there is a great breakdown in the song that starts with a guitar effect then a catchy mosh sequence. "Hunter Seeker" is up next, a decent track with some semi-complex riffing and catchy verse vocals lines, though the chorus is pretty bland. Third is the cover of the Ramones' "Gimme Gimme Shock Treatment", given a decent thrashing rendition. The final song on the EP is "Blind Leading the Blind" is an exercise in crazy speed metal charisma, with a few technical thrash chops and dual speed melodies near the climax.

The mix here is pretty typical of its days, the vocals strike right through the music yet you can hear the crisp guitars blazing and just barely the distorted bass bouncing below. Joel Dubay's vocals were the typical high pitched speed metal style of the 80s but he could put a mean sneer on them when needed. The material is just a lead-up to Absolute Power, which has better songs than what you'll find here, but if you're a thrash metal collector and purist you will enjoy these songs, including the cover song. Speaking of covers, the comic book art was a nice touch.