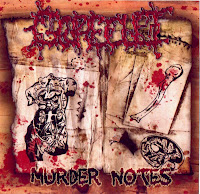 This is the debut EP from a new Argentinian death metal band with a straightforward, brutal sound and some fairly guttural vocals, with a Cannibal Corpse influence to the some of the riffing. Though I didn't love the material, it's got some catchy parts to it as well as a nice thick production.

After a piano instrumental the band breaks into the mid paced grinder "Vomit to Death". There are a few sweet guitar lines to the track but it's otherwise forgettable. "Blood Retribution" is more exciting, sounding like something you'd hear off Bloodthirst or Gallery of Suicide but a little simpler. "Dismembered Alive" has a lot of start/stop, while the cymbal rides between the bursts of death. "Behold the Art of Gore" is a slower track with a rock out riff under the guttural discharge. It did not have me taking my cock out though. The EP ends with one of its best tracks "The Scythe Madmen", which has some nice old school ripping guitar riffs, some squeal and very old Cannibal Corpse/Six Feet Under groove to it. I really liked the end to this song with its great, evil speed melodies.

I might not have been impressed with the material, but there is little negative I can say for the band. They have a thick and crushing sound to them, and despite the lack of doing anything original they sound like they're having fun. They've got the potential to develop into a pretty destructive force, so I shall keep my eyes and ears open.