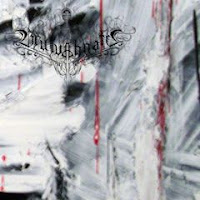 This is the sixth demo from this sick Canadian fuck, but it's set at album length. Brulvahnatu takes the raw feel of suicidal black metal to an extreme. The vocals are hoarse and squelching in the mix, the drums are super tinny as they crash along, the bass twangs with a distorted evil, and the guitars...

The guitars are what make this album standout. They are played with extremely simple and melodic, yet doom-like tones. It's quite captivating and I was smitten with this approach immediately by the time the first track "Eternal Sleep" was at its midpoint. Various tracks seem like they were recorded at slightly different times or levels of production, but they all have the same effect. They entrance the listener between their jumbled, dissonant noise and the emotional images they collect within the note slinging of the guitar. This is as amazing as it is amateur. Most of the songs are great, some I could pick out would be "Tortured from Beyond the Grave", "Visions of Spirits", "Machines of Destruction", and the beautiful "Drowned by the Red Waves", which is simply perfect...

The sound this guy 'Kib' comes up with is so wondrous I would almost label this some sort of sick blackened post rock. It's difficult to believe because the lyrics seem like they are some of the worst shit I've ever heard, yet that fact alone gives them a distinct edge. Apparently Kib uses the music to communicate with a spirit from his youth. As for the recording, despite the dissonance noise of the vocals and drums, the guitars and synthesizer lines shine with their glorious simplicity, each a piece of loathing or longing.

This is an unbelievably awesome demo, and yet...not. If you fancy yourself a fan of black sadness that can really take you to the polar ends of its insanity, you really need to check out Closeness to Death. There are very few basement/bedroom bands quite like this one. A tranquil yet terrifying treasure. I was disappointed to read on his site that it may be the last.