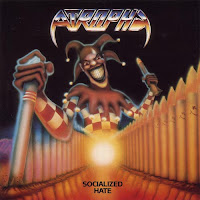 Another casualty of the mass exposure of thrash and speed metal in the late 80s, Arizona's Atrophy released two albums of very solid quality, Socialized Hate being the first. Moored in Brian Zimmerman's dirty and crunchy vocals, they performed a rather technical and blazing form of thrash music, pissed off at the problems of the then-world: drugs, warfare, TV evangelism, and of course...beer!

The album begins with a tranquil yet haunting ambient sequence before the tense neck jerking riffs of "Chemical Dependency" erupt. The second track "Killing Machine" is a classic, with some great guitar work to open, and then a fast and furious verse riff and a great chorus breakdown:

Born to kill
There's no retreat
Live to fight
A Killing machine!

Okay, so this isn't rocket science, but it's all in the delivery. And with this album, things just keep getting better, with the excellent thrashing "Matter of Attitude", the mad triplets of "Preacher, Preacher" with their almost Helstar technicality, the epic "Product of the Past", and the pit frenzy of "Urban Decay". But the song you all really wanna know about is their beverage tribute "Beer Bong", with its Tankard-like lyrics and list of brand names. Can you name the nine brews mentioned in "Beer Bong"? Without cheating and looking them up? I didn't think so. Well here they are: Heidelberg, Dutch Treat, Black Label, Meister Brau, Blatz, Grain Belt, Old Milwaukee, Pearl and Shaeffer.

Oh, my friends, the things I teach you. The pleasures I share. Anyway, so Socialized Hate is a pretty great thrash album which has only grown in my estimation throughout the years. Bouncy bass, crazy guitars, and grimy vocals highlight a collection of fun songs. I think the songwriting improved a bit with their second and final album Violent by Nature, but this was a more than worthy debut.

Verdict: Win [8/10] (something more than animal, yet something less than man)