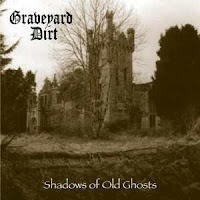 Shadows of old ghosts indeed - Graveyard Dirt are an Irish band that formed back in 92 and called it quits after one demo in 96. Yet, more than a decade later, they're at it again with a fantastic ep well worth any doom fan's time.

Graveyard Dirt play a very classic British style of death/doom, strongly reminiscent of the Peaceville Three in its spacious sound, yet still original and quite compelling. There is a strong feel of the romantic, pagan pride that many of the Irish bands seem to have moving through the humming guitar leads, to speak nothing of the lovely accented spoken sections that pepper the songs with Celtic glory. The vocals otherwise stick to a gruff, shouted style full of character, although it can get a tad strained when he tries to get more melodic without giving up the guttural aspect. Of course, as is necessary for doom, Shadows of Old Ghosts has a rock-solid, heavy churn to the guitars to give a ponderous weight to each song. The lyrics move with an anguished, quasi-religious theme running throughout that harks to the ongoing Christian troubles of Ireland, but they're first and foremost full of despair, and it works well.

The surprising part? Much of the material on this album was actually written around the time of their original demo, although it wasn't recorded until recently. If this had been released back then, Shadows of Old Ghosts would easily have become a classic, or at the very least, a huge cult favourite. It will be interesting to see how completely new material will sound, what with the large amount of time that has passed, and we'll have to wait and see if they can produce enough material to create a compelling full-length effort, but I'm confident that these blokes won't drop the ball if they continue on.

http://www.myspace.com/graveyarddirt
Posted by is this your life? at 6:00 AM