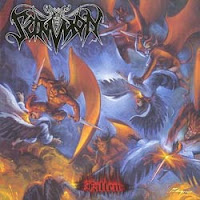 This is a classic example of an album that should be a common household name amongst metalheads, yet rarely seems to come up. On Fallen, Michigan's Summon offered a level of intensity rarely seen in a US band, before or since, and frankly, I find it bewildering that they don't get more praise heaped on their heads.

Summon play a furious blend pulled from the devil's triangle of black, thrash, and death metal. After a quick, foreboding intro, Fallen makes good on the promise of the cover art - "Blood Red Skies" is a storm of bottomless hate, an army of crimson-tipped riffs charging relentlessly past the ephemeral light of the weak. "Mindrot" continues with a predatorial scream of triumph, an open-armed exultation at the conquering of morality and the concomitant plummet of life into depravity and madness. Each piece on the album upholds this violent pace, yet the album avoids monotony through very distinct songs that know when to lay off the speed to keep things from blurring together.

Fallen spins a simple picture that is more than familiar to the general metalhead, but the single-minded passion that it's delivered in paints it far more vividly than most bands ever could. Xaphan howls in basilisk tongues, blistering and full of venomous hate, yet without sacrificing clarity and legibility. The riffs are harsh and ready to draw blood, but not above taking a moment to bludgeon you alongside Moore's superb drumming. These blokes have a lot of talent, and it really shines through on this album. Every now and then there's a clunky riff, but Summon never sit around long enough for it to become a real issue.

Sadly, the band disintegrated from the power of their own hate, purportedly ending in a fistfight between members at a show, and this was to be their last effort. Sad? Certainly, but there are far, far worse ways to go out than ending on such a high note. Fallen stands as the highpoint of their albums, an opus that still stands out in a music scene devoted to the extremities of expression. Thankfully, this wasn't the complete end for those involved - Xaphan has recently resurfaced with the punk/thrash project Wastelander, while the other guitarist and drummer also showed up last year in the debut of metalcore/thrash band Dissonant.