The Law - Distorted Anthems from the Suburbs (2008) 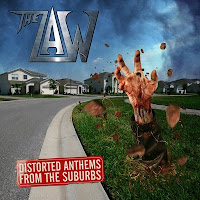 This is a Swedish thrash band highly influenced by the 80s American scene, from the Bay Area style of Exodus and Forbidden to the NYC greats like Anthrax and S.O.D. The vocals are kind of wild and have that Germanic edge of bands like Deathrow, Vendetta, and Paradox. Peter from Vomitory is one of the guitar players, and the riffs are fairly exciting in many of the songs.

The intro "Lawman & the Law" is an instrumental thrash setup bit, similar to what you'd hear on classic albums from Sacred Reich, Razor or S.O.D. Unfortunately, the next track is painful. "Anthem" is basically one of those cheesy biographical tracks which list off influences and talks about the band itself, I generally tend to hate this type of thing. We KNOW you are a thrash band, we KNOW you have those influences, we are listening to your album right now..."We found the truth in our guitars"?! Give me a break.

Musically, the album gets better after this, once the band moves on to actual thrash song subjects and just becomes much more energetic and fun. "Nothing to Say" is a bristling Bay Area thrasher with some great vocal thrills. "Can U Not Talk" might make my eyes water with its title, but it's another thrasher that makes me want to rage with its flowing speed. "Dude of Darkness" (again, ugh...) is yet another fun and crisp sounding thrasher. "Suburban Satan" is a pretty cool Anthrax-styled anthem. To close out the album, they cover Overkill's "Elimination", and it's a pretty good fit considering this band's influences, though the vocals come off a little goofy (some would argue that Blitz' original vocals were goofy, and to those people I would offer a hardy fuck off!)

The album sounds great, nice and bright tones, the vocals are pretty excellent when the lyrics don't completely suck, and the gang shouts also work well. It sounds like the band is having a blast with this style, and if you also want an old school thrashing neck injury, then you may want to listen to this. Some of the lyrics and song titles are extremely stupid to the point of being painful, so I hope next time out they'll take it a little more seriously (that the band is into retro thrash is already implied in the sound, we don't need anything else to beat us over the head with the fact).