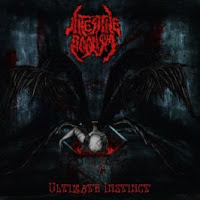 It's about time, right? Five years since their great sophomore album Banquet in the Darkness, Japan's premier death metal cult returns for what is probably its finest hour yet. Ultimate Instinct simultaneously channels the crisp thrashing death metal of their earlier albums, and pays a bloody tribute to some of the greatest death metal albums of all time. Well, at least on a few of the tracks...

"Agony in the Stone Chamber" sounds like it belongs on Consuming Impulse from Pestilence. I'm serious. Its unflinchingly old school, churning, groovy riffs remind me of my very favorite death metal album. The only difference is the brief melodic lead at the beginning, and perhaps the vocals (though they sound close to Van Drunen's older stuff). Fucking excellent song to open your record. "Cry for the Black Sun" is quite different: a melodic death metal track rooted in the earlier Swedish sound of the 90s, but with some progressive rock breaks that felt decidedly Japanese. "Longing for Birth" is centered around a great, deathgrind riff which conjures Terrorizer, Napalm Death and old Entombed to my horrific delight. "Awaking" and "Wind of Death" are both more melodic death tracks like the style they used on the earlier albums. Same could be said for "Dark Surface", but this song is COMPLETELY AWESOME, one of the best on the record. "The Massacre" is a brutal mix of sickening grind and kick ass chug death metal. "Ultimate Instinct" is a melodic tour de force with some incredible riffs. The album ends with "Galaxy of the Black Sun", once again one of the best melodic death tracks they've ever composed, with a beautiful and creepy bridge riff.

The album sounds nice and lo-fi but crunchy and crispy just as their previous outings. The vocals, both growled and snarled are full of enthusiastic vile energy and the riff writing is quite hard to top. This is an album that truly lends some legitimacy to the term 'melodic death metal', but you won't find any of the staples which have dominated that scene of late (keyboard-guitar racing, radio friendly rock chorus, etc). Ultimate Instinct feels retro in places, but in the best way...by doing honor to its influences without becoming stupid in the process. At the same time, it's somewhat diverse and balanced.

This is an amazing album and I hope I won't have to wait another five years for the next one, because clearly this band still has it.

Loving this so far. Nice to hear some death metal that doesn't break or follow any formulas overmuch.