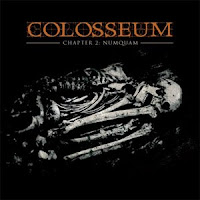 Finnish and on Firedoom - you know you're in for a treat. Provided that you can enjoy the slow and low, of course. Juhani Palomäki's (perhaps more familiar as the frontman of Yearning) other project, Colosseum, is back with a follow-up to the promising, albeit unfocused, debut album Delirium.

The style here is very Finnish, and instantly brings to mind Shape of Despair through the prevalence of synths and the overall pleasant, shimmery sound that evokes sorrow much moreso than overbearing doom. Soaring, virtuosic guitar leads and keyboard melodies provide a thoughtful focus that pulls the listener through the song, well aware of the plodding funeral material that lies below yet never held back by it. Thankfully, Colosseum don't lose themselves in the keys and manage to keep up a solid, satisfying core. Numquam is a very consistent album built around a strong formula that deviates very little from song to song, so the entertainment to be found here should be easily understood - if you like one song, you'll like the rest, and vice versa. The only break in the album is "Outro," a trippy little piece that shows a more experimental side of the band, one that I think should be expounded upon more in subsequent releases despite the throw-away nature of the track. On the thematic end of things, Colosseum go for a familiar, despair-laced esotericism, delivered in the poetic choppiness of one whose first language isn't English:

Moments languish in their absence while silence moans
Paralyzed in dormancy, lifeless slumber drowning in emptiness
Senses still flicker awaiting the hopeless awakening to a vague travesty of being
Carrying human body in a long dead soul

I found this to be a rather enjoyable listen and a good start to 2009 in terms of funeral doom. In fact, the only aspect that I feel is really holding Numquam back is the fairly flat production. Although it's heavy and ripe with expansive reverb, the album is just too dry for its own good, lacking that crushing weight that really drives this style home. If they can keep it up and flesh out the sound a bit, I wouldn't be surprised to see Colosseum become quite big in the funeral doom world.

http://www.colosseumdoom.com/
Posted by is this your life? at 5:02 AM