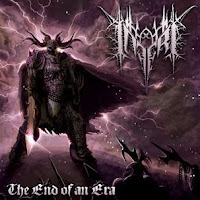 This is the sophomore and final release from a melodic death metal band from Tennessee. It's rather unfortunate, because they delivered an insane barrage of guitar riffing here that you'll rarely hear amongst the circles of Swedish wanna-be outfits taking up this style. Though this is a limited release and the band is unsigned, I have a feeling it will circulate far. The guitars ensure this will appeal to fans of technical US metal like Arsis, not to mention the already massive melodeath/metalcore fanbase.

As I mentioned, this album is about the guitars. These guys have done a phenomenal job of keeping the pacing fast and furious. Each track has dozens of them, and a great many of them are catchy. You'll sit at the edge of your seat listening to these guys weave their mayhem, whether its the noodling harmonies or the rapid fire rhythms. The drums keep up well, as does the bass, though the latter is rather low in the mix. The vocals are your garden variety melodic death metal, but at the very least they don't come off lame like the overbearing metalcore style a lot of US bands are using. The lyrics and titles revolve around fantastic war themes, and they have a slight Christian feel to them, but I can't confirm whether this is pro- or con- or neo-Christian and frankly it makes little difference.

The album takes a few moments to breathe. The intro "The Ruin of Mankind" is an instrumental with some keyboards and nice guitar meloides before picking up into a metal anthem. "A New Breed of Savior" starts with some acoustics before picking up into its roiling madness. But the overwhelming majority of the songs are winding and melodic labyrinths of perplexing intensity. Extremely consistent quality of riffing across all the heavier songs, if I had to pick a few favorites I'd run with "The Endless Siege", "Sentenced to Eternal Life", and "Forged in the Phlegethon".

For an unsigned release, the album sounds pretty good. I mentioned the bass is a little low but everything else is crisp in the mix. The guitars, though thin, pierce right through the vocals and drumming. If you are into well-crafted melodic death metal, don't hesitate to check it out, even if just to listen to the guitars go off. It's well worth the time, and a shame the band won't be continuing, they probably could have been huge with this formula.