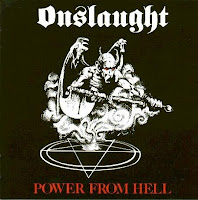 Years before they hired Steve Grimmett and sought a more technical and accessible direction to their thrash, Onslaught were one of the more abrasive and filthy speed metal acts from England. Wild and messy burning leads, driving punkish rhythms (they were originally a punk/hardcore band) , and the dirty and aggressive vocals of Paul Mahoney defined the ripping sound of this debut album. Aside from Venom, this was probably the rawest thrash outfit to make a splash beyond the Isles, albeit a small splash. They were also another of those bands which could be considered proto-black metal, due to their vile faux-Satanic aesthetic and unrelenting sound.

Power From Hell is a cult classic for a reason: 12 tracks of sacrilegious speed which display a clear demonic presence (or maybe it was just the drugs). The band blasts out of the starting gates with the amazing "Damnation/Onslaught", fueled by riffs not unlike the early from Destruction, Sodom, or even Tankard's Zombie Attack (though the latter came later). Fun and simple riffing, but delivered at quite an extreme pace for its day. Other noteworthy tracks include the mid-paced "Lord of Evil", the almost prophetic anthem "Death Metal", the bone crushing "Steel Meets Steel", and the searing "Witch Hunt". There aren't a lot of dynamics to this record, and frankly they weren't needed, this album had simply come to sex up your woman and sacrifice her on the devil's altar.

The production is rather dense and dark, with driving, crashing drums, a thick layer of menacing guitars, and a good bass presence (even if it just follows the guitars for the most part). This is probably best delivered via vinyl, like many old albums, but it still sounds great digitally. Many bands today are still aiming for this simplified and effective sound. Onslaught are certainly near legendary as one of the earliest sheer thrash/speed metal bands to embrace this occult style post-Venom, and an essential for purists. The band is still around today with their 2nd vocalist Sy Keeler.