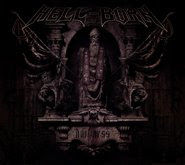 I know you're probably straining your eyes at the cover art. So am I. But to be fair, the album is called Darkness. Poland's punishing sons return for their 5th full-length, a mild disappointment after the great Cursed Infernal Steel. But not for lack of trying.

The style on the album is very straightforward brutality with some groove to the riffs, routed in the same primal structures as the early Swedish death metal scene. The majority of the tracks chug along at a mid-pace. While the album carries a bludgeoning, thick as molasses sound, and the leads slice through with pure old school evil, most of the riffs just aren't that interesting. "Refuse to Serve" is a decent album opener, the riffs remind me of Amon Amarth's style of glorious, melodic death metal. After this, one of the faster tracks emerges, "(I Am) The Thorn in the Crown", but it's not quite memorable. The next two tracks were unfortunately forgettable; not until "In Satan We Trust" did I find myself straining my neck again. "Submission", "The Black of Me" and "Hellfire" are all passable, and "Dead Don't Preach" closes the album with a bouncing chug-fest reminiscent of Domination-era Morbid Angel or recent Behemoth on a slow day.

The album sounds thick and menacing, the band is definitely delivering its share of brutality, but the riff writing just seems phoned in. I can't really recommend this album. If you want to check out some far better work from Hell-Born, track down Cursed Infernal Steel or Legacy of the Nephilim, both are quite good.