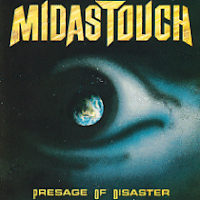 Before its hostile takeover of international death metal in the 90s, and then becoming what is arguably the capital of metal music worldwide, Sweden was relatively quiet on the scene. There was quite a healthy amount of melodic hard rock and early power metal, but as far as thrash...not so much. This is part of what makes Presage of Disaster such a gem, another in a long line of good to masterful Noise Records releases.

Midas Touch is best described as a band who followed the style of technical German thrash (Mekong Delta, Deathrow, Destruction, Vendetta, etc) but with a dash of Metallica thrown in for good measure. After a fitting into, "Forcibly Incarcerated" arrives with a loopy synthesizer and an acoustic passage, and then let the thrash begin! A mosh pit begins to stir below the choppy lead scales. "Sinking Censorship" targets the rather obvious Parental Music Resources Center and its tyrannical crusade to cock block the 1st amendment (and what 80s thrash album would be complete without such a loving tribute?) "When the Boot Comes Down" is a slower track, Patrick Wiren's accent during the cleaner vocal sections is quite funny, but the song is decent. "True Believers Inc." covers yet another typical thrash subject of the 80s: the TV evangelist. Some of the best material on the album comes later on the album. "Aceldama - Terminal Breath" is perhaps the best known track, with its trilly intro riff and start/stop verse, and the chorus breakdown.

Losing your mind, you see things in a new way!
Losing your grip, your reason is tearing away!

The album closer "Subhumanity (A New Cycle)" is another of the best, with some great leads and a nice trudging verse riff. Other good songs include "Accessory Before the Fact", "Sepulchral Epitaph" and the acoustic instrumental "Lost Paradise".

This has a pretty solid mix for an older thrash record, the guitars may seem a little thin but this works well in conjunction with Wiren's nasally mid-range vocals, giving the album that anesthetic tech thrash feel akin to Mekong Delta or later Deathrow. There are a lot of good riffs and the bass really goes to work under them. The lyrics aren't perfect but for the time they were intelligent enough; bands had some serious subject matter in those days. Today you are lucky if a thrash band even sounds pissed off at all. Presage of Disaster may not be on my short list for top thrash metal albums in history, but it was a well-constructed bruiser of an album for its day, and still sounds almost relevant to my ears now. Unfortunately, the 2nd album So Shall You Reap was never finished, so this was pretty much a one-shot career. But you can track down a few tunes from that hypothetical sophomore effort on their MySpace page, and they sound good.