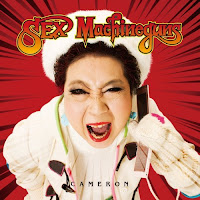 The Sex Machineguns have been one of the bigger names in traditional Japanese metal for years, but I've never really been able to get into their sound. They have a sillier, wilder take on the material than other bands like X Japan or Double Dealer, and I never really know what to expect.

Cameron is at times rocking and at times very annoying. The album opens up with the speed metal of "Ahiru" and the crazy vocals basically kill the song for me, ranging from gang shouts to background chanting to high pitched whining. The riffs and solo are decent but not outstanding. "Hitoduma Killer" is quite a lot better, it's mix of balladry and speed metal reminds me a lot of countrymen X Japan. When the band reigns it in like this and just delivers, they are quite good. "Seishunjidai", "Tamago Death", and "Urashima Tarou" are all really good tracks, memorable and fun. But there are others like the "Jacky" and "Ookami Chuunen" which are predictable and dull for the most part.

At its best, Cameron should appeal to fans of Japanese speed metal ala Anthem, Loudness, Seikima-II or the aforementioned bands. A few of these songs might go on an extended Japanese metal playlist, but there is quite a lot of what I'd consider 'filler' material.