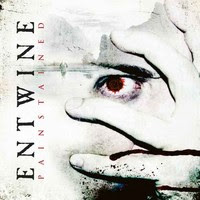 I've always held a soft spot for Finland's Entwine. Though the majority of their output has been rather mediocre gothic metal in the familiar vein of many other bands (H.I.M., Charon, later Sentenced, etc), they are one of the longest lasting bands in that scene, and each of their albums has offered at least 1-2 killer, memorable tracks. This makes Painstained somewhat of an anomaly, because almost every song here is good.

I should state that if you don't like driving, melodic, hooky gothic rock, stop reading here. "Soul Sacrifice" starts the album with a driving, fuzz guitar tone and some synths which recall earlier Amorphis, with catchy, almost folk-infused melodies. Mika's vocals are very friendly and melodic, we're talking radio fare here if this band could ever be given the chance (and let's be honest, we'd rather listen to Entwine than Nickelback or Evanescence any day). "The Strife" has a similar pace, rocking out with some great riffs, in particular I like the mute picking under the verse vocals. "Dying Moan" begins with alternating some acoustic ambient parts with some and a barrage of grooving chords. Not one of my favorites here though. "Beautifully Confined" returns to form with a nice groovy riff, and a tranquil verse. "Lost in My Denial" is a ballad with a rock build-up, it's not so bad if you're into that. "Greed of Mankind" reminds me of "Bitter Sweet" a little, one of my favorite Entwine tracks past. "Dead by Silence" is a pick me up, very catchy rocking number. The remainder of the tracks are decent.

Overall it's quite the solid effort, with an exception or two. Whether or not you enjoy it will really depend on how you feel about listening to accessible, melodic rock with a gothic background. As I mentioned earlier, this would not be out of place on your local rock radio station. If you enjoy the catchy Finnish melodic goth metal scene, then Entwine will fit your tastes nicely. They do an admirable job with the style, focusing solely on the memorable songwriting. The vocals are quite good, but if you generally associate this type of rock with tail chasing or 'emo' you will probably want to pass.