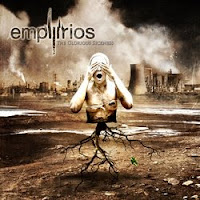 Italy has always been a hotbed for the heavier progressive metal bands, think the heavier side of Dream Theater and you're in the right ballpark. Empyrios is such a band, they remind me of both Eldritch and Devin Townsend/SYL for the combination of musical proficiency, heavy and melodic vocals and dense production values. If that sounds good to you, then I can certainly offer a recommendation here.

This is the band's second album, and it's presented with a highly professional mix that dazzlingly displays the bands talent and diversity. The low end is important, as the band utilizes a lot of chugging, grooving heavier riffs to anchor the majestic, soaring vocals. Silvio Mancini has a voice that can both stand out and blend into the atmosphere conjured on the album. It works in both its aggressive and higher pitches. They are also unashamed to compliment this with some electronics. "The Eve Arose" begins with a combination of heavy grooving rhythmns and a fairly catchy chorus. "Psg" is faster and better, I love some of the up-tempo riffing and it has quite a catchy chorus that should appeal to fans of bands like Angra, Dream Theater and Angel Dust. This band has the rare ability to mix clean progressive/power metal vocals and aggressive melodeath growling without it actually coming across as shitty. There are a wealth of other good songs on this album: "Pandaemonium" and its sick trilling breakdown; the very groovy "Entering the Boulevard" with its progressive breaks; the mid-paced, rocking "Decadence Parade"; and the hooky "Chaosbreeder".

Some listeners may feel that the modern, groove metal edges to the album remind them too much of Nu Metal, but in reality prog metal bands have been doing this for years. Empyrios does this loudly, and they do it well, never at the expense of the more melodic hooks in the songs. It works as a fundamental element to their sound. The album has its moments and it has some filler, but it should appeal to metal fans who value a bold studio production, talented musicianship, and a balance of the heavy and the melodic.