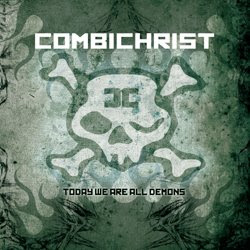 Might as well get this done while I'm on a industrial kick. Now boasting the drummer from Imperative Reaction, Combichrist are a relatively new, yet successful, act in the dark electro/aggrotech scene who coin their style Techno Body Music.

You can save yourself some strenuous eye-rolling, though, since this is actually a pretty fair description. Combichrist have the usual brooding EBM sound, with throbbing, rich synth layers and the good old stomping four-on-the-floor beat, yet this is married to a more European techno energy. I suppose this is covered by the aggrotech genre label already (which apparently applies to Grendel and :wumpscut: as well), but techno body music is an effective way to describe it. The sound here is much closer to Grendel than :wumpscut:, down to the almost too cheesy samples (the intro does cross the line), but it certainly doesn't rise to the level of either. The songs are simple but put together well, offering up plenty of reasons to dance in lieu of any innovations. The singer does change things up between songs, which is appreciated, but he doesn't always strike gold. The vocals on the amusingly titled "Can't Change the Beat" and a couple others have a strangely familiar sound, like ripoffs of NIN tracks, that I'm not sold on. I also find the main synth on "Get Out of My Head" to be a poor choice, but after naming it the diarrhea fart synth, I enjoy it a little more. Oh, and the final track has close to 20 minutes of silence in between two audio tracks...I fucking hate when artists do that. Go eat your cock instead next time, please. Other than that, the songs are what you'd expect - solid, danceable, foreseeable. With its solid production and infectious energy, I wouldn't be surprised to see Today We Are All Demons become popular at clubs in the near future.

http://www.combichrist.com/
Posted by is this your life? at 4:31 AM