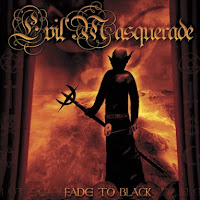 Despite the band's obvious wealth of musical ability, I haven't enjoyed the previous albums from Evil Masquerade. But with Fade to Black, the Danish band has surprised me with its catchiest songwriting yet. Somewhat of an international metal supergroup, these guys have quite a resume. Apollo Papathanasio also sings for the excellent Firewind, and he's worked with Time Requiem and Gardenian. Henrik Flyman played in Wuthering Heights. Bassist Johan Niemann has been a part of Demonoid and Therion. This band performs a melodic power metal style with some symphonic and progressive touches. The riffing varies from noodly progressive scaling to darker, thrashier riffs with some bite to them.

"Lights Out" opens the album with some catchy and complex riffing (I am occasionally reminded of talented 80s guitar metal like Helstar or Yngwie), catchy chorus section and several nice solos of the neo-classical semi shred variety. The keyboards also jam off with the guitars, with a tasteful execution. "In a Dungeon Close to Hell" begins with a grittier, thrashing riff and a vocal pattern that follows the picking nicely, but it's not one of the better songs on the album. "The Darkness Within" has a catchy synth line, I like the breakdown during the verse with the piano accenting the vocal effects. "Hollow Soul" is a great straight up heavy metal song with some catchy vocals, and well represents the band at their best. Of the remainder of songs, I highly favor "Different Shades of Black", "The Ultimate Game" and the slower half-ballad "I Believe in Sin".

The album has the excellent, professional production we come to typically expect from this genre. The musicianship is creative enough to keep your interest but also traditional enough as far as the shredding capabilities and classical riff influence. The leads are consistent and the lyrics never come across as cheesy. Apollo's voice sounds great on this album.

The album is good enough that I feel it may be worth re-listening to their older work and giving it another chance. It's not perfect, I could live without several of the tracks, but if you're into power/heavy metal with tight musicianship, melodic hooks and vocals then it's probably worth exposing yourself to some Evil Masquerade.