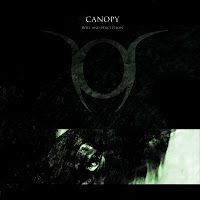 Sweden's Canopy are not one of the better known melodic death acts from that area; but as Will and Perception is out to prove, perhaps they should be? This second album is a clear improvement over Serene Catharsis (2006), a work which transcends the trappings of its genre to explore varied terrains. The core of their sound has more in common with the progressive, slow death of an Opeth than the synth-bathed thrust and groove of a Soilwork or Dark Tranquillity, but there are enough melodic pick me up moments to relate to the latter.

Canopy has taken great care to craft this collection of songs. Few of the individual riffs will jump out at you as legendary, but they flow well into a unified listening experience. The gruff vocals and bludgeoning chords of "Decipher" are graced by the presence of the synths, rather than replaced. "Perception" creates a beautiful, cascade of melancholy through the opening melody, and as it breaks into its chugging bridge, and then a folklike tranquility, the guitars continue to exhilarate. If you seek heavier fare, the band answers with "For the Sickened Voice to Hear" and the dark, mesmerizing "Riddance". Perhaps the most interesting track is "Counsels and Maxims", an instrumental with acoustic guitars, guitar ambience, and a drum machine with some very cheesy clapping...it works remarkably well among the more pensive and aggressive vocal songs.

Will and Perception has made a believer of me, that a band Canopy may very well be the future of this ailing genre. They manage to capture the ponderous ruminations of Opeth without reaching into some void of over-indulgent boredom. Also highly recommended to fans of Finnish acts like Noumena and Insomnium.

Highlights: Perception, For the Sickened Voice to Hear, Counsels and Maxims