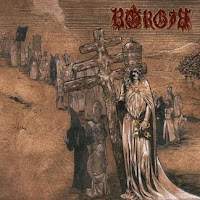 Borgia is yet another entry into the French pantheon of bands that merge styles to create a progressive work quite unlike anything you have heard up to this point. Ecclesia is their first full-length effort, following a series of demos and a compilation.
An obvious starting comparison would be Deathspell Omega (or newcomers Way to End), but Borgia are not as manic or frenzied. Their work is difficult and labyrinthine as far as the songs are written, but not technically exhilarating. Géraud de Verenhe has a very dark wealth of vocal talent, from his harsher tones (reminiscent of Swiss legends like Tom G. Warrior or Coroner's Ron Royce), to the gothic cleans delivered through Romance tongues. There is a creeping complexity to the guitars which range from old school death metal rhythms, to a pulse of black discord with roots in Voivod or Ved Buens Ende.

"Le Bûcher des Vanités" initiates the ritual through a charging black rhythm which lops off its own tail for a death groove. The band mixes the two approaches so well that it can often become perplexing where one ends and the other begins. The bass playing is quite good, popping along during the band's more hyperactive riffs and then anchoring a syrup-like groove. Arpeggios and other licks are used here more for chaos than technical indulgence. "Par La Croix Et La Bannière" has a fierce fusion of unshaking melody in its verse rhythms, and again the bass thunders. "Litanie du Misanthrope" is a pensive track, slower and I dare say more ominous feeling than the previous, with hints at glory to match the band's lyrical themes of medieval times, the travails of religion and the promise of sacrilege. "Des Martyrs...Allégorie De La Foi" feels like a slightly more complex extention of "Litanie...", with some good old school death rhythms infused within. Other good tracks include the bells and choirs of intro "Te Deum", the morbid "Flagellum Dei", and the mesmerizing bedlam of "Conquistadores".

This is one of those albums which begged numerous listens before I could even sit down to describe it. The mix itself is very dark and polished, a great vehicle for the band's stylistic misanthropy and the Dark Ages that forever settle in their minds like dust. All members are quite talented, including the vocals, which are ever fascinating as they flip between tones. Definitely a band to listen for if you like Deathspell Omega or the most recent album of Merrimack.