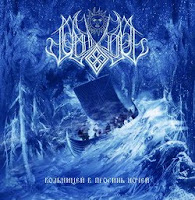 Forget for a moment that this band has the best name and logo in pretty much all of metal music, or that they also have some really amazing cover art going on for this release. Temnozor are another of those 'notorious' bands loosely associated with the NSBM movement in Europe, but you require no involvement or investment in any ideology to appreciate their glorious hymnals to the sorrows of our fading, natural world and the honor of the ancestors who shed their blood in getting us where we live today. Two of Temnozor's members are native to this band (flutist Raitbor and clean vocalist Petr), but here we also have the involvement of Kaldrad, who sits atop an entire discography of great, raw black metal as Branikald, and his Forest/Woods of Fallen cohort Svyagir (also in Walknut). Kaldrad is responsible for the black metal rasps, but Svyagir actually composes a wealth of the material and performs the all the other instruments, quite a talented guy.

Temnozor is pretty versatile as far as folk metal, some of their demos are more experimental, but Folkstorm of the Azure Nights, their third full-length effort, is the pretty standard run and gun of black pagan aggression, with a little punk influence, a little folk, and a bunch of different vocals, from the snarls and cleans to male and female whispers. And since nothing is sexier than a female Russian voice (in either the native language or English), I found myself committed to its joys and sorrows.

This folkstorm begins with the title track, as tribal drumming and piercing synths roll across the aforementioned whispers, before the desperation of the metal rhythms commenses, and the vocals become louder and more panicked. Though the band avoid's any complexity of structure, the song is still rendered memorable by its passionate authenticity. "Vranakrik" is christened with a birds' cawing, but swifter and more straightforward black metal with the deep, gruff Russian vocals. The production is rather raw and barbaric, like a windstorm tearing at your flesh on a cold afternoon. "When the Lazure Skies Tear the Hearts Apart" brings tranquil, fine acoustic work into play, the vocals quite beautiful and subdued, power chords surging forward where required to grant an epic veneer. This is one of the most intriguing tracks on the album, fully worth the 8 minute investment. The flute of "Watch the Falcons Fly" lends a biting counterpoint to the churning, melodic black rhythms, and there is one particular discordant riff in there I enjoyed when it would appear.

"As the Autumn Razors Sing Above My Veins" (how is that for a title) is another song to make use of acoustics, these thick and plucky as they cavort about scales beneath the narrative vocal intro, which becomes quite epic as the vocals transform with some flute and synth choir. The mid section of this song is haunting and mesmerizing. "Arkona" is an anthem to the Slavic city of old, with some great Russian vocals and a building intensity betrayed by the rather steady, distant guitars. The final piece is titled "Tell Me, Ye Scarlet Dewscented Sunrises", and commences with some sweeping keyboards and choirs, before the dark, dual vocals in thick accent, drunken as if immersed in vodka. Flute and winds soon arrive to create a tension, and the track makes for a rousing climax to the album, as even more vocal choirs and samples of battle and bloodshed cap it off.

Folkstorm of the Azure Nights is quite an experience to take in, as few other acts have this level of glorious composition. The sound is quite good, lively and organic; not at the level of, say, Arkona, but better than most Russian black/folk metal you will come across. Temnozor is heavier here on the former than the latter, but the vocals make it a lot more interesting than your average snarlfest. This band still has plenty of room to grow. Folkstorm is certainly a worthwhile experience, but not the pinnacle of their potential.

And I stand corrected, the band has TWO of the best logos I've seen in metal.