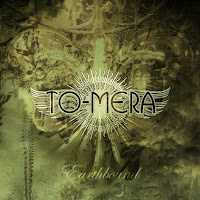 To-Mera are certainly an anomaly in metal music: one of the few progressive metal bands with a female singer that I am aware of even existing. Julie Kiss has a vocal style which recalls Anneke (formerly of The Gathering). She uses a lot of emotion and inflection within her voice, instantly separating her from a lot of the talentless gothic metal band fronting hacks. To date, the band has released a pair of decent full-length albums in Transcendental and Delusions, and this new 4 track offering serves to further the band's exploration into shifting rhythms, and dense atmosphere driven by the guitars and synthesizers.

Unfortunately, it does not always succeed. "Mesmerized" has a nice layer of chords and keyboard melodies, kind of a hybrid of post-metal and psychedelic 70s synth-prog rock, but I didn't feel like Kiss' vocals really matched up. Their rhythm follows that of the band, but they feel like they are often wandering off into their own stratosphere. It's like hearing two musical artists performing in-time, but to separate audiences. "Earthbound" works a lot better, not only is the music superior but her vocals cut right into it, with a little less of that separation (though the style is still the same). This track sounds like early The Gathering jamming in their prime with Yes or Marillion. "Arcane Solace" has some good bass digging and jamming, groove guitars, reminiscent of Madder Mortem's more trippy nu-groove elements, and once the band begins to elevate the track through the start/stopping with rolling double-bass and beautiful, lush keyboards, Kiss' vocals again sound pretty good, far less of that disconnect. "Another World" is the most orchestral of the pieces, with more big grooving guitar chugs and the band gets good and jammy later in the piece.

The EP is almost 30 minutes long and it sounds quite good. Musically the band has much to offer a stale genre of metal music, and To-Mera has one of the better fusions of modern metal and a rich tapestry of progressive influences dating back to the late 60s/70s. Kiss is a talented vocalist, but she is often hit or miss for me, especially on the first track here. I'd like to hear her offer a lower range in some spots, I think it would fuse her style in more firmly with the band's writing.