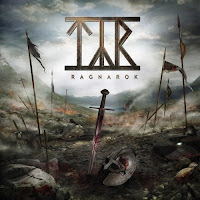 Týr is a name heard round the world, one of the few bands to emerge into the Viking/folk stratum with a truly unique sound, and perhaps the only metal band of note to ever hail from the lightly populated Faroe Islands. Ragnarok is their 3rd and most vital full-length album, which takes the penetrating melodic tones of their early work to a new height. This band does not simply evoke the storm and carnage of their conceptual material, but a brilliant warmth permeates their riffing and the dominant vocals of Heri Joensen. About the only comparison I could make would be Borknagar, during their Olden Domain/Archaic Course years, but Týr is simultaneously more advanced and less frantic in their writing.

This album is a complete journey, thorough in its subject matter, with 16 tracks of narrative folk-telling (ranging from the full-length metal songs to intro and outro pieces). The musical talent and restraint of the band is near legendary, and they manage to foreshadow and conjure themes which they will re-use throughout the work as a whole, a glorious subterfuge which glues the experience into your memory. This is no blasterpiece, the band rarely experiments within the more extreme reaches of metal music. Instead you will find melody steeped upon melody, complex and weaving through a hurricane of carefully laid rhythms and beautiful vocals. Aside from Joensen (who also plays guitar), the band is comprised of Terji Skibenæs (guitar), Gunnar H. Thomsen (bass), and Kári Streymoy (drums). Each a capable player in full service to the songwriting, never indulgent or breaking rank for any foolishness.

"The Beginning" dabbles in sparkling acoustic work and some powerful inlays of melody, the instrumental nature of the track lacks for nothing emotional, as the guitars create arches of sadness that scour the memory. "The Hammer of Thor" hearkens with a phenomenal dual melody that is picked up through the drums and bass, slowly gaining ground into a near charge, plucky mutes painting an aural portrait as Joensen's disgustingly hypnotic range. "Envy" is a brief, 70 second acoustic piece that sets up the gallivanting "Brother's Bane", and the vocals hit a mid range stride reminiscent of Hetfield's 'rock' vocals (though far more impressive). I fancied the glorious bridge of the song, as the melodies sting out from beyond the circular rhythm. "The Burning" is another intro/instrumental piece, played in a progressive/fusion rock style, but not lacking the band's folkish taint. "The Ride to Hel" is quite likely my favorite Týr song period, with its slower, crawling rhythms and the absolute eruption of beautiful vocal melody conjoined to the guitars at about 1:15, which will return during a faster rhythm later in the track. Try and shake this one from your brain, I dare you, one of the best folk metal hymnals ever conceived!

Who has won, who has lost
Boldest son
Sent away and you will count the cost

We all died, when you fell
Far and wide
Waiting one to take the ride to hell

A hard song to top, but the band will at least try several more times on this very album. "Torsteins Kvaedi" builds a dark, worker-like atmosphere, one can almost imagine the falling of timber and the slow, careful construction of longhouse or longship, as the sun arks through the day into the next. "Wings of Time" is similar, if married to a more festive lyrical pattern, while "The Hunt" takes on a swerving, prog metal groove to it, with a great rising/falling vocal pattern that perfectly pops across each plummeting guitar rhythm. "Lord of Lies" has a rousing folk melody which is so strong that it takes second place on the album, also some fantastic bass work. Scattered about these are some more of the band's shorter, instrumental pieces, and the title track "Ragnarok", which was probably the weakest of the metal tracks, though not lacking an atmospheric cohesive with the rest.

Ragnarok is simply one of the best mixed albums I've heard in the genres of progressive OR folk metal. The completely professional polish is almost mandatory in order to squeeze forth every nuance from the vast repertoir of riffing. There is a lot of music contained within this hour, with very few refrains necessary. The album does climax with "The Ride to Hel", but very little of the glow would fade later. Though their following full-length Land, is also quite good, it failed to deliver this level of composition, and Týr really have their work cut out for them if they wish to top this effort.

Highlights: The Hammer of Thor, The Ride to Hell, Torsteins Kvaedi, Wings of Time, Lord of Lies