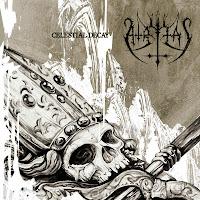 Swiss black metal act Atritas have been blasting away since 1997, with a carnal, furious paced style reminiscent of Swedish bands like Dark Funeral or Mörk Gryning. Celestial Decay is their 3rd album, and a little less symphonic than its predecessor Medium Antigod. The keyboards still have a part to play here, but the songs here live and die by their guitar riffing. Vocalist Gier has a pretty scathing rasp, though he will balance this with a deeper, death-like edge over of the thicker guitar rhythms. Though aggressive and bloody, the band's sound is far from a grim bedroom level barbarism. They've got a fine-tuned studio polish which creates a lot of clarity in the chaos, yet the songs will still scream at you from the broad slopes of the Alps late in the winter night.

The "Ultimate Downfall" heralds the imminent demise of all that is holy, through a thick bank of symphonic fog that rolls across the land into the blasting mayhem of "(Sacrificial) Devil Worship Psalmody". I like the sonic flow of the speed picked verse guitars over the double bass, and the track later offers some morose keyboards that don't interfere with the biting axe-centricity. "Gnosis" wrangles a tall melody, a peak to the valley of Gier's snarling creature, and then begins to haunt the mountainside through some chord driven atmosphere. Very cold and eerie. "Memorium Magicus" has a fiery, bold rhythm with a nice, thrashing impulse (again reminding me of Mörk Gryning in a good way), and "All Celestial" is like staring at the ceiling of a black cathedral as it slowly fades into the vacuum and angel draining starlight of a winter night. "Blasphemic Madness" is punishing vitriol with another of the band's thrashy skeletons, and "His Presence" has some dense symphonic atmosphere and arcane guitar wizardry. "Peste Sacrale" and "Divine Apocalyptic Gloom" are also notable as scorching inductions of sin and slaughter.

Atritas are not a unique entity, their style can be largely attributed to an influence from the Swedish black masters, but Celestial Decay is a well-written affair which delivers high production standards and a wealth of captivating, diabolic atmosphere. They're not as relentless as a 1349 or Dark Funeral but it might be worth the time of any fan of Sacramentum, Dissection, Marduk, or Emperor's In the Nightside Eclipse to at least give this a playthrough.