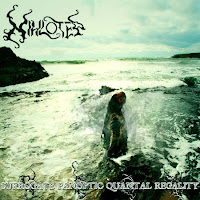 Here is the case of a band whose 'what the fuck' album title truly matches up to the musical performance within. Nihlotep hail from California, and they play an extremely spastic and dense form of black metal aggression which often feels like a rusted saw being hewn repeatedly through every layer of your skin and skull, right down to the brain matter where it remains lodges. I'm not going to lie here, the first listen through most of this album annoyed the piss out of me. But the second, the second started to reveal a lot of potential to what the band had on offer. A kind of cerebral, cutting form of experimental black that hovers the psyche across a vast expanse of chaos and confusion.

Can you survive nearly 80 minutes of this?

To be fair, certain tracks are more insane than others. For example, "The Work of a Lifetime" is over 15 minutes of frenetic, swarming insect-like rhythms that batter and rape the conscience until you literally breech the walls of madness. I cried out for Jesus at least once every 3 minutes during this track, and as usual, noone was home. "Seduction and Sedition at the Deluge of Opacity" begins a little more slowly, but sure enough, after an ascending melody it kicks into hostile overdrive. The acoustic intro to "We Watch Him Prostate in Emulation" was akin to a peace offering, before the band breaks out into some dense and disturbing rhythms. It does weave back into tranquillity again, and then returns to its godless aggression. "Nihlotep" and "Mosaic" are two of the album's shorter tracks at just over 8 minutes, and the latter has some pretty interesting, dissonant fusion of grim acoustics and jazzy black. The closer is 18 fucking minutes long, almost as long as it takes to read the song title: "Shrieking in the Womb of Aker, Shrieking at the Sight of the Old Man". Though it's quite the trip, the song does wander through a vast landscape of tempos and styles, ranging from pure black bombardment to kind of freakish breaks in the action like something you might find on a Mr. Bungle track, though more serious in nature. A lot of the more interesting music on the album is actually contained within this finale.

The fate of man doth with the seasons change
Sub-thought colors twitch the brow
In a dreamless sleep
As the fog rolls in...
Such purity, such beauty, unapologetic, irreverent art. In spite and in flame and on the edge of a sword do I slice and torch my way through the gilded grotesqueries of the human form.

The band does not lack for talent. The guitars buzz like melodic saws of nihilism. The drums are a tornado, rash and sporadic but fast as hell. Sol Invictvs has a pretty average black metal rasp through most of the material, but he gets stranger, offering some cleaner, narrative gothic tones, some screeching and some more garbled, 'guttural' black vocals. The lyrics are pretty good. The album sounds suitably lo-fi but not like it was recorded in someone's outhouse. As far as the quality of the music, well, I was at times pissed off and at others fascinated. I won't say I enjoyed the experience, but I think this band can and will turn some heads with their lavish extremities.