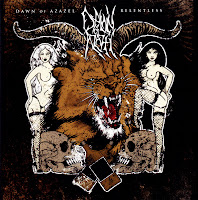 Dawn of Azazel is one of New Zealand's stronger metal acts, and as they prove with this 3rd full-length effort, they are not above the incorporation of modern elements into their sound. This is a pretty groovy album, with a lot of big meaty rhythms that squeal and shake you to the core. Paired up with Rigel Walshe's scratchy, nihilistic vocals, the album often feels a little like the more aggressive side of metalcore meets death. Now, before the xeno-metalians and 'elitists' decide to panic and find a dank dungeon to hide themselves in and cry, Relentless is a fine example of this styling being applied correctly. It's very metal, and it's very good. It's a little more brutal than a band like, say Gojira, but has a similar attention to production standards and huge grooves.

As for its lyrics matter, Relentless focuses on the struggles of flesh, the strength and futility of manhood and the indulgence in vices and sin, and it does so through a very aggressive, staggering slew of percussive, almost drunken precision (I know, an oxymoron). The riffs all lash at you like the spiked ball end of a flail, and you can only imagine the slamming that goes on during this band's performances. I personally enjoyed the songs which go a little above and beyond the meaty punishment, like "Majesty" which rolls out a pensive, atmospheric guitar line above the choking, thundering rhythms. "The Art of Seduction II: Ravishment" also has some nice discordant guitar work which adds a layer of vitriol. But the majority of the album is sheer barbarism, and tracks like "Fornication Revelation" and "By My Hands" are extremely violent and riveting.

The album sounds crazy. Blast it in your car and you're likely to drive all potential dates/girlfriend away in fear. But all your friends will love it, until they snap their necks after 2-3 tracks, then they'll just lie there, looking dizzy and empty. But you can't sit still when you hear something this bombastic, it's got a mathematical edge that can make fans of Meshuggah and Gojira salivate while probably still appealing to the more open minded tech death crowd. Dawn of Azazel have delivered their tightest selection of tracks to date. Don't be confused by the covert art, it's a little sillier than their prior offerings but that was likely the intent (the band has an obvious sense of blunt humor).