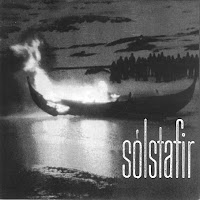 Newer listeners, whose entrance to the Sólstafir sound begins at the amazing Köld, might be quite perplexed if their curiosity takes them back through the years, for the amazing atmospherics the band is conjuring today are far removed from their primitive origins. Til Valhallar was the band's first formal release, an EP boasting 6 tracks of raw and aggressive black metal with only the barest hint at the voluminous, swelling guitars and terse atmosphere of future offerings. Yet, if listening through their work chronologically, one would not find it so difficult to trace a line through the albums and notice a very natural, positive trend to their evolution.

Sólstafir have always been a different band, and though the writing here fits every familiar definition of the 'black metal' medium, there are some subtle differences in texture and approach. These could be conscious decisions, or these could be cultural and regional (there has always been something to the band's that simply howls of their homeland) influences. For one, there is a noticeable punk and post-punk taste to the riffing. Though it doesn't neglect the speed and fury of the band's metallic kin, the raw fervor feels wild and uncaged. Aðalbjörn Tryggvason's, while similar in tormented tone to something like Burzum, also carry this off the hinge feeling that recalls screamy underground punk and hardcore music. There is also an influence for moody folk, delivered through the band's streaming, melodic acoustics. The tin of the drums and the popping bass really carry the taint of these outside influences into the Viking themes, and Til Valhallar is rather something to behold in its brighter moments.

The surly and beautiful sample of a folk singer inaugurates "Ásareiðin", which then proceeds through a mid-paced shuffle under the surging, buzzing guitar lines. While the band is raw as fuck, there is a melodic, sovereign grace carried through the chords which betrays the rather simple and straight forward barking of the vocals. A synth drops in briefly for the bridge, to highlight a simple rock chord pattern, before the track once again enters its rapid fire verse. The title track "Til Valhallar" opens with a churning, post-punkish guitar scape, like an Icelandic Sonic Youth, over the driving drum rhythm and the bloodied ice. Again, the track breaks for a mellower bridge segment, in which the guitars soar, but the track is really made interesting through the bass and drumming. "Dauðraríkið" is an even more impressive song than either of them, for it swells with sadness, turbulent and raw double kick hammering, and carries more of a Viking feel. The bass thunders, the guitars are ripping like a longship across the cold sands of the shore, but what really shines is the gloomy, psychedelic acoustic breakdown, that abruptly blasts forth once again into the chaos. "Hovudlausn" is an instrumental piece that closes out the original release of the EP, with acoustic guitars flowing into some heavier chords like the first waves of spring that break through the ice on the North ocean surface.

The re-release of the EP also contains two bonus tracks. The grungy, aggressive "Huldulandið" once again features the punkish angst, while the "Í Helli Pólýfemosar" is a morbid, crawling piece which uses several vocals in tangent to create an unnerving effect. Here, Tryggvason straightens out his vocals to a more Viking-like level, and then astride there are another dub of deeper vocals which feel like they are talking along. The track also breaks out into a straight, crunchy punk rhythm. It's very interesting, in fact the most curious piece on this release, and in some ways this also best foreshadows the band's later progression.

So, while Sólstafir's sound was not nearly at the range of moody post-rock influence it currently dispenses, there has always been something tweaked, something strange about the band. This was a grim and wondrous introduction to a band that was, both geographically and pscychologically, left of the scene ongoing in mainland Scandinavia. I'm not entirely enamored of it, but I certainly appreciate the ground that this unsusual act has and will travel.