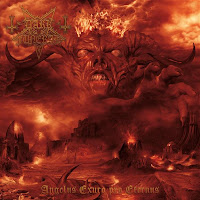 If there is one thing to be said for Dark Funeral, you know what to expect when going in, and you generally get what you paid for. You're not going in for innovation, and you're not going to remain in God's good graces; you are here to get your ass kicked by a blast of diabolic Swedish black metal, an all expense paid trip to inferno with Masse Bromberg (aka Emperor Magus Caligula) as your tour guide. Since last paying their respects to Lucifer with Attera Totus Sanctus in 2005, the band has undergone a change in the drum position, the double bass blasting dynamo Matte Modin having moved on to whatever onslaught sees his mercenary skill in demand. His replacement here is Nils Fjellström, known here as Dominator, who has also performed with a myriad of Swedish acts like Aeon, Chastisement, and In Battle, to list but a few. The man has large shoes...or should I say pedals, to fill, and he does so, if a little more reserved than some of Modin's drumming on prior works.

The only reason I mention the drumming in such important light, is because Dark Funeral lives and dies on its blasting hostility. Many peer bands have moved on towards varied pastures, but this band enters the studio each time, hellbent on blowing your eardrums out with walls of obscene battering. Sure, there are Lord Ahriman's sinister guitar spewings, made stereo through Bo Karlsson, and the quality of these is in line with a Diabolus Interium, but it's the hammering thunder of the rhythm section that fuels Caligula's hellish wrath. And Angelus Exuro Pro Eternus is sure to let you have it, slamming straight through two bestial warfields, "The End of the Human Race" signifying "The Birth of the Vampiir" and then all fucking hell breaking loose. For a few brief sections, "Stigmata" allows you to relax beneath a war drumming, vile guitars and a deeper Satanic narrative vocal tone, but it cannot last...and DOES NOT last. The blast. The blast.

So it falls upon "My Funeral" to provide an eye to this storm, which it does with a slower, albeit, rolling ballistic presence below darkly glinting atmospheric textures that are created largely through the guitar riffs. The title track follows, and it is right back to Blasting Demolition Team 666. Few ankles could dare rough this territory, but Dominator is probably not human to begin with, simply a black metal torture machine given flesh. I'd like to take the safe way out and say that all this blasting becomes 'tiring', but as it is not my first exposure to Dark Funeral, I would not have it any other way. "Demons of Five" opens with a nice descending guitar line, some molten work on the toms, and a very thick, rolling gait begins to amass, a legion of winged abominations whose names cannot be spoken making a desperate strike against the gates of Heaven.

This is followed by the tumultous and bruising "Declaration of Hate", wherein Caligula gets all disgusting, like some succubus has snaked her whip across his throat and squeezed even more vulgarity from his poor chords. I would hate to be this fiend's tonsils. "In My Dreams" is another of the slower, atmospheric pieces with the huge guitars that spawn cathedrals of hatred against the emptiness. "My Latex Queen" is last but not least, a seductive symphony of superblasted fury at which the Emperor is the only qualified conductor.

To be blunt, there are not many tracks here that caught my attention for anything further than an energetic fuckfest from somewhere South of paradise. A few of the tracks, like "The End of Human Race" and "Angelus Exuro Pro Eternus" provide a few catchy lines, but the rest is just a flying guillotine of torment and the same, thick, driving textures the band has been producing since Vobiscum Satanas. Truly, not a lot has changed since that period, but that fact only stings if you actually want it to. Angelus Exuro Pro Eternus sounds immense, as Dark Funeral make great use of their status and funding to get as professional as a band in this genre ever can. I can't laud the band for its musical invention or for surpassing some of their prior pieces, but if you're a devout Funeral attendee I don't think you'll be highly disappointed with this latest anti-hymnal. The question is, when do we get another Sportlov album?

Highlights: scaring my neighbors with this album