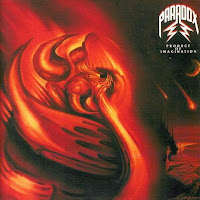 Though the Germans have spoiled us with their two recent efforts, the most satisfying in their career, you can still reach back 20 years into the history of Paradox and find nothing but quality. Product of Imagination was the band's first offering, a melodic cut of thrash and speed metal which some similarities to peers of the day like Rage, Vendetta, Mania, Scanner and Deathrow. The material on this album was less complex than the recent Riot Squad and Electrify, the lyrics were still dabbling in mid-80s fare like Satan and nuclear warfare (okay, maybe nuclear warfare never gets old), and Steinhauer's vocals had far less bite than on later records, but there is still enough character here to appeal to the diehard 80s Teutonic rager.

The first few tracks don't offer much in the way of huge hooks, just a blitz of crisp thrashing energy through the band's namesake "Paradox" and the silly "Death, Screaming, and Pain" which is rather unmemorable aside from its first moment. "Product of Imagination" features the style of acoustic lead-in that the band would further sharpen on the successor Heresy (and continue to use through their discography), and the vocals start to become wilder and infectious. The guitarists get some shredding and tapping out of their system through the brief "Continuation of Invasion", and then "Mystery" arrives, one of the better tracks on the album: melodic and heavy speed metal rhythms, and some nice crunchy breakdowns. "Kill That Beast" is similar to "Death, Screaming, and Pain", not much to remember except for the silly chorus (I'll spoil it for you...it's the song title).

"Pray to the Godz of Wrath" is another of the album's strong marks, with some great vocals, a galloping gait, and nice descending guitar rhythm, though it has nothing on "Beyond Space", which erupts in a blaze of speed and lays the foundation for much of the band's later, better work. The album closes with an 18 second song..."Wotan II", which has a pair of pretty good riffs in it that could have been extended out into a song that would surpass a few of the full-length tracks here.

Product of Imagination was a decent start for Paradox, but it soon got lost in the pack as the thrash metal scene was exploding in 1986-1990 and there were far better albums out there to enjoy. The first was the worst, as Heresy would destroy this album, with an enhanced sense for melody and memorable riffing. There are a few songs here I still wander back to, but not a lot of impact and the album hasn't held up well against the ravages of time (whereas Heresy still sounds great).

Highlights: Mystery, Pray to the Godz of Wrath, Beyond Space