Embryonic Depravity - Constrained by the Miscarriage of Conquest (2009) 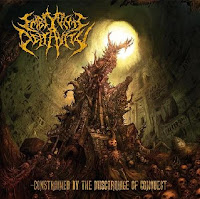 The UK has been producing a lot of brutal death metal bands of late, often with these massive names. Recently we've heard from Repulsive Dissection and Infected Disarray, and now the debut from the gore laden psychopaths Embryonic Depravity. Anyone in the know of the past decade of extreme death knows what to expect here, insane levels of brutality which are tempered by complex grooves, technical adequacy, insane drumming. The cover art and logo for the band really brought my thoughts back to the early days of Suffocation, Malevolent Creation, and the like, but the writing has enough labyrinthine density and squealing guitar fill to appeal to the most jaded Necrophagist fan, and enough low end slag and frag for the Devourment maven to stretch his mighty muscles.

Let's be clear from the start: Embryonic Depravity are not concerned with a lot of musicality. There are few memorable hooks to be digested through this apocryphal 10 course meal. But their energy is focused on beating the piss out of your ears. Embryonic Depravity are also not concerned with your safety. This is an extreme metal record for fans with the attention span to absorb its intricate bludgeoning. If that includes you, then welcome to suicide. I've worked construction job sites with a jackhammer that were less noisy and grating than this band. If you sent an Embryonic Department song as a telegram to any head of state, war would be immediate. These songs are all slamming and indifferent, and they also can kick a whole lot of ass. "Bound by Dejection" sounds like a half dozen death metal bands jamming together; Rob Newson's vocals get pretty guttural and busy and it's like a hellish game of Pac-Man, with your soul on the line. Tracks like "Apotheosis Through Isolation" and "Acephalous Transmutation" grind through intense batteries of chaos and erosion, and the title track is like Suffocation and Demilich having a tug of war with your intestines.

It wasn't easy to sit through this entire album, and few individual tracks really stood above the rest. But that's not for any lack of energy and punishment. The mix is bright and modern, each chuggering reveals the subtle and complex riff patterns and the vocals are like abyssal toads that preach of end times and the excrement of civilization. I feel that there are other, ultra-brutal death bands who write more fetching material (Severed Savior, or the latest Deeds of Flesh, for example), but Embryonic Depravity know their target audience, and this debut knows how to beat the fuck out of them.

Highlights: finding out your home has not just been leveled by demolition equipment, and that your entrails are still inside your body.